An excellent jumping stallion with some of the best sporting bloodlines. 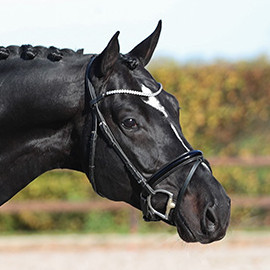 
Terms - €950 + VAT for unlimited attempts with chilled semen on one named mare in one breeding season, if the mare is scanned not in foal by the end of September €650 + VAT will be refunded.

About  - Five generations of top genetics - Air Jordan, Contendro I, Heartbreaker, Voltaire, and Grannus  , the stallion is of international calibre. With seemingly limitless scope and a powerful stamp, this striking horse’s jumping technique and style are strongly reminiscent of his father, Air Jordan, who won prestigious Grands Prix under Daniel Deusser and whose career began in Klein Roscharden.

Performance - Air King passed his 14 day test in Adelheidsdorf in 2017 with exceptionally high marks for jumping, as expected, and the second highest mark of all candidates for rideability (9,0). He passed part I and II of the HLP-Sporttest in Münster-Handorf with 8,16 and the dream grade of 9,01. He has already won a variety of show jumping classes and been highly placed in M classes. The first crop of foals were almost all awarded premiums.

Sire -  Air Jordan the stallion who ranks 57th in the world rankings for the second consecutive year. He is one of the best Sire for young horses. He placed second in the World Cup final in Las Vegas and the big winner in CSI5*, he belongs to a very good Hanoverian family of winners. His offspring are known to have won hundreds of thousands of euros in prize money.

Damline - Grandmother, Remember Me, delivered four international 1,50m horses. The successful damline Trak. Line O181B Mascotte (Mack- Althof Ragnit) produced the stallions Albatros by Acord II (S2*, Hendrik Sosath) and Quinnus II by Quidam’s Rubin (S2*, Denis Nielsen) as well as the World Champion of young showjumping horses Liza Minelli 15 (Sönke Rothenberger). Damsire Contendro I ranks no.1 in the WBFSH sire rankings for 2020 with nearly 50 offspring competing at Grand Prix and majority gaining FEI results, he is one of the most prolific sires across the board of disciplines.