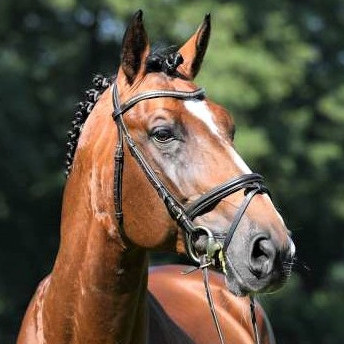 
Terms  - €2100+VAT, allowing unlimited attempts with chilled, for one named mare in one breeding season. If the mare is certified not pregnant before the end of September then a 50% credit applies to spend on a Schockemoehle / Helgstrand covering the following year. If the first AI of the year is July 1st or later, the credit the following year is 100%.

About - One of the best jumping horses on the international circuit, All Star has enjoyed a fantastic career at the top of the sport under Denis Lynch, and we are excited to be offering him following his retirement from sport. All Star is a tall, elastic and athletic stallion with boundless scope and ability. He is a powerful, rideable horse with a brilliant canter and phenomenal hind end technique.

Performance - With 270 international appearances under his belt, All Star is one of the most prolific and consistent horses on the global circuit. He has won more than €320,000 in prize money on the Global Champions Tour alone, and over €1.1million in total prize money. He was 5th in the 2016 World Cup Final, 9th individually at the 2014 World Equestrian Games, and part of the gold-medal-winning Irish team at the 2017 European Championships in Gothenburg.

Sire - Sire Argentinus, who jumped at 1.50m level himself, has produced more than 70 grand prix horses including Arko III, Thunder van de Zuuthoeve, A Lee Spring Power, Airport, and Adlantus, and more than 75 licensed sons. Arko was one among Nick Skelton's greatest campaigners, competing at the Olympics and siring several grand prix horses in his own right. Argentinus’ offspring are also highly placed in dressage, such as the European Championship gold medallist Albano, the two-time German Champion Amaretto, and August der Starke OLD.

Damline - His state premium dam April Love ZH was placed in young horses competitions and also produced the licensed stallions Pilaro (by Pilot), placed at advanced level, Allstar (by Argentinus)/Oliver Ross, victorious at advanced level, and the mare Contessina (by Contender), who herself produced the licensed stallion Quel Homme. His grand-dam is none other than the internationally highly successful Rinnetou Z, who jumped at 1.60m level and also produced the licensed stallion Chardonnay Z (by Caretano). Her half-sister Zalza (by Zeus) and half-brother Cornelis Z (by Cor de la Bryère) were both internationally successful, and her half-brother Rival Z (by Ramiro) was a licensed stallion. The line goes back to the wonder mare Fairness Z, with whom Hartwig Steenken made his international breakthrough. Amaretto I-IV, Acolito, Oak Grove’s AH, Dirty Sanchez, For Fairness, Lalique del Chirone, Don Darco de Bornival Z, Apricot, and Absalom Z, also come from this line.