A top jumping stallion with the heart of a lion, from five generations of grand prix showjumpers 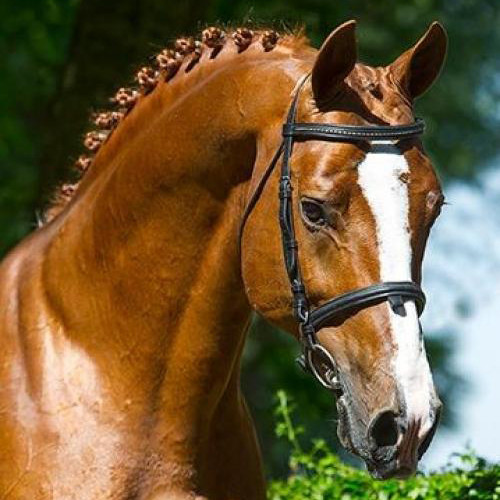 
Terms: €1500+VAT for unlimited attempts with chilled or frozen semen, for one named mare in one breeding season. If the mare is certified not in foal by the end of September, €1200+VAT will be refunded.

About - Arezzo is a unique stallion, with five generations of grand prix jumpers in his pedigree from both sides; Chin Chin, Heartbreaker, Renville, Jasper and Akteur all not only jumped at top level, but have sired grand prix jumpers as well. He is a compact, powerful stallion with plenty of scope and an excellent technique.

Performance - As a three-year-old, Arezzo was champion of his performance test, scoring 9s for his scope, reflexes and talent. At the World Championship for Young Horses in Lanaken, Arezzo jumped clear in all rounds and then finished 4th in the finals. Arezzo won the Dutch national five-year-old championship in 2010,  and then had an outstanding 7-year-old career: 4th in the Queen's Cup at Mechelen, 3rd at Saint Cecile and Liege, 4th at Oliva, 6th at Verbiers and 6th twice at Twente. He won at CSI5* level in Hertogenbosch, and has since gone on to have a top grand prix career with further wins at Helsinki, Olympia, Vestfold, Hertogenbosch and Poznan under Dutch team rider Jur Vrieling.

Sire - Sire Chin Chin needs no introduction, as one of the most influential sires of the modern day. He competed twice at the Olympic Games, finishing 6th individually at Seoul 1988 before going on to compete at Barcelona 1992, and twice at the World Equestrian Games, including the inaugural games in 1990. He jumped at World Cup level for five seasons, and in 1988 he won five consecutive World Cup legs on the North American tour with owner Jaime Azcarraga. Offsprimg of Chin Chin have consistently jumped at Wolrd Championship and Olympic level, including Sancha La Silla, individual finalist at London 2012 and Belgian 7-year-old champion Phin Phin.

Damline - Arezzo's dam Sarjolijn, a state premium mare by Heartbreaker, has two half brothers at top level; Dragonfly, ridden by Nicole Simpson, and three-time Hamburg Derby victor Nacorde. Grand-dam Parjolijn competed at grand prix herself and is the mother of grand prix horse Easy Boy. Arezzo's damsire Heartbreaker is also one of the best stallions in modern sport; in 2015 he was crowned KWPN Horse of the Year in recognition of his outstanding achievement in sport and breeding, beating the European dressage and jumping champions of that year, Valegro and SFN Zenith NOP. Heartbreaker is also the grandsire of jumping star Hello Sanctos, winner of the prestigious Rolex Grand Slam, and was in the top ten of the WBFSH for seven consecutive years (2009-2015), a feat not achieved by any other jumping stallion.

Progeny - Arezzo's sons and daughters are already proving themselves to be among the best on the circuit. In 2016 three of his sons were accepted for the KWPN Performance Test, with Hilfiger VDL placing third in the KWPN Champions' Ring, while Emotion VDL enjoyed much success in young horse classes in Wellington before selling for $175,000 at the WEF Sport Horse Auction. In 2013 Ilena VDL was the jumping price highlight of the Star Sale Veulenwiling, while at the Provincial Mare Show of Flevoland, the top three placings were all Arezzo offspring.