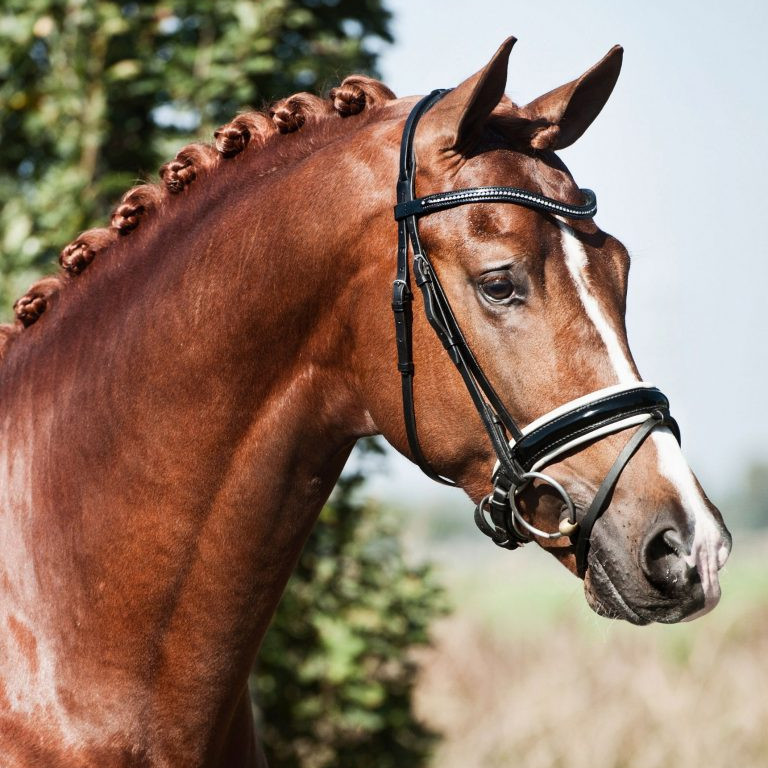 
Terms- €1800 + VAT for unlimited attempts with chilled semen for one named mare in one breeding season; €1400 + VAT will be refunded if the mare is certified not in foal before the end of September and the remaining amount will be credited for the following season.

About-  Ibiza is an outstanding young horse, who has been one of the most talked-about stallions in the past year. With his expressive movement and incredibly uphill frame, Ibiza has impressed crowds all across Europe on every appearance. He is a good combination of hot yet rideable, with a huge, ground covering canter and an active, pushing hindleg.

Performance - Ibiza was the top selling foal at the 2013 KWPN Foal Auction. After entering the auction as a wildcard, he sold for the top price of €72,000, the second highest price ever paid for a foal at a Dutch foal auction at the time. After the Oldenburg licensing, he then sold to Germany for €170,000 and has also been licensed for Hanover.

Sire - At the World Championships in Verden, Desperado was 7th in the 5-year-old final with a score of 16.6, and 8th in the 6-year-old final on a score of 8.3. He is now competing successfully at national level at PSG and Inter I. His sire Vivaldi competed up to Inter I with Hans Peter Minderhoud, scoring over 72% internationally at PSG. He was reserve champion of his stallion performance test, and in 2007 he won the Pavo-Cup of five-year-old dressage horses. In 2008 and 2009, he added triumphs in the KNHS/KWPN stallion series achieving marks of 10.0 for his trot. Vivaldi is trained to advanced level. As a producer, he is now recognised globally; so far, in Germany alone 19 of his sons have now been licensed, amongst them several highly-priced premium stallions. Vivaldi enriched the World Championships of young dressage horses in Verden in 2014 and also in 2015, where his son Eye Catcher won the bronze medal of the six-year-olds. In 2015 and 2016, his son Fenix won the five and six-year-old Pavo-Cup in the Netherlands. The Pavo-Cup of six-year-olds was a real festival for Vivaldi in 2016, when behind Fenix, in second and third place, were First Apple and Fantastique, both Vivaldi progeny. Vivaldi also produced several mare winners at shows and in 2016, he was once again third best stallion of the FN dressage breeding valuation throughout Germany with 169 points. Desperado's dam Sarita is a successful dressage mare herself, and a daughter of Havidoff (Harpsichord x Farn). She is also the mother of the stallion Chinook, full brother to Desperado, who in 2011 was reserve champion of the Pavo Cup for four-year-olds. Her dam and grand-dam are both state premium mares, and in addition to successful dressage horses this damline has produced grand prix showjumpers as well.

Damline - Jazz led the WBFSH Sire Rankings for four consecutive years (2008-2011) and has never been out of the top 10. He competed at the 2002 World Equestrian Games, and his sons still lead the sport - Jerich Parzival was 2011 European Champion and World Cup Final winner, Wynton is one of the leading young stallions in Holland, and Glock's Johnson was team gold and individual bronze medallist at the 2015 Aachen European Championships. Jazz has over 50 licensed sons, including Don Juan De Hus, Westpoint, Desperado and T-Movistar. Ibiza's dam Bolympia W has three full brothers competing to grand prix, including the licensed stallion Wilton. The damline has produced many top level sport horses for both jumping and dressage.

Progeny- Asgards Ibiza  has had 10 licensed stallions at four different stallion licensing events from his first crop of foals.  One of his most famous sons, is Iron, a Champion Stallion of the dressage licensing in Denmark, placed in the World Championships for young dressage horses.