A proven sire of top-class international grand prix horses and eventers, from an outstanding family. 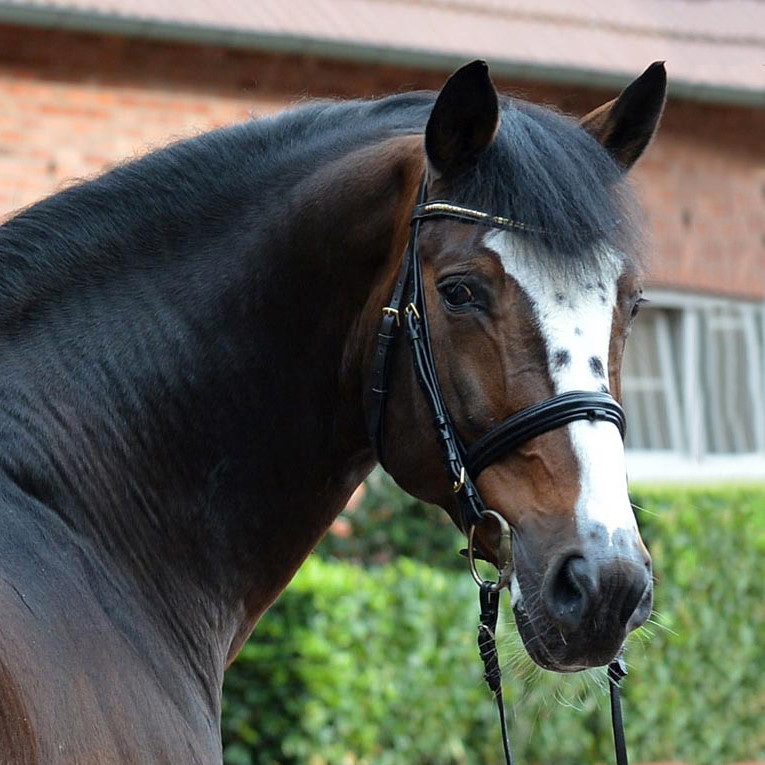 About - Balou Du Rouet is one of the most popular jumping stallions, consistently producing good temperament, excellent movement and powerful jumpers. Suitable for amateur and professional riders alike, he suits all but the smallest of mares.

Performance - After winning one young horse class after another and gaining marks up to 10.0 in his 30-day test, Balou du Rouet successfully competed at 1.50m with more than 19 wins at this level. In 2005 he caught everyone's attention by scoring the highest mark of 9.2 at the National Championships, making him one of Germany's top 4 licensed stallions. His enormous jumping talent, combined with great elastic gaits and a fascinating charisma make Balou du Rouet an exciting choice for the breeders of sports horses.

Sire - His sire Baloubet du Rouet needs no introduction. As individual gold medallist at the 2004 Athens Olympic Games, and three-time World Cup champion, Baloubet Du Rouet was undoubtedly one of the most successful breeding stallions of his generation. He won the French national championships for 7-year-olds under Nelson Pessoa, having been a finalist as a 6-year-old. Following his three successive World Cup victories (1998-2000), he was then not out of the top three in the following three years (2001-2003). Baloubet Du Rouet has been in the top ten of the WBFSH Sire Rankings every year since 2010, leading the rankings in 2012 & 2013. Grandsire Galoubet A jumped at the highest levels, winning team gold at the 1982 World Championships, and is one of the most dominant progenitors of jumping horses in the world.

Damline - On the dam's side, Balou du Rouet is descended from the founder of the bloodline, Cor de la Bryere (by Rantzau xx) via the great Contender. The offspring of the dam's sire, Continue, achieved lifetime earnings of over €230.000. Numerous licensed stallions are descended from this dam line.

His licensed son Balou Star, by Quick Star, won team and individual bronze and the FEI Young Rider European Championships 2015, and won the Royal Highland International Stairway as well as the U25 grand prix at the CSI4* Liverpool.

Offspring of Balou du Rouet have been approved at almost every stallion licensing, including Be Bravo, who sold for €350,000 as the most expensive horse of the 2007 AOS auction. In 2011 his offspring doubled their lifetime winnings to €267,000, as his first crop started jumping internationally at the age of 8 - including Baloubetta du Soleil winning at Rotterdam, Horse Gym's Balzaci winning in Leipzig, and Best of Balou winning in Neustadt.  The same year, his maternal half brother Cornet's Balou won the  Bundeschampionat for five-year-olds.

He emphasises his dominant quality as a producer in type, elegance and movement, with numerous foals at many different auctions. He continuously produces finalists for the German foal championships - in 2011 his foal Buenos Aires achieved the highest price of the Zangersiede auction - €32,000.  His son Bakony was the most expensive foal at the Hanoverian auction, at €23,500. He had the most offspring in the 2008 Bundeschampionate, and 3 finalists in the 2009 event. He has over 60 approved sons including the Munich Licensing Champion, Balou's Bellini, with 10 of his sons being awarded premiums at their various licensings.

Balou du Rouet is proving himself not only as the sire of successful showjumpers, but also as a valuable sire for eventing. He is the only stallion to appear inside the top 10 for two disciplines in 2017, ranking 8th for jumping and 9th for eventing. His successful eventing offspring include Billy The Red, who was part of the gold-medal-winning British team at the 2017 European Championships, finishing fourth individually, and Reve du Rouet, who was second in the CCI4* at Pau in 2017. He is also the sire of Ballbreaker SD, who recorded three top-10 finishes at CCI/CIC2* level in 2017, Barrichello, ridden by William Fox-Pitt, Fortuna SCF, winning at 2* level in the USA, and numerous other international event horses.