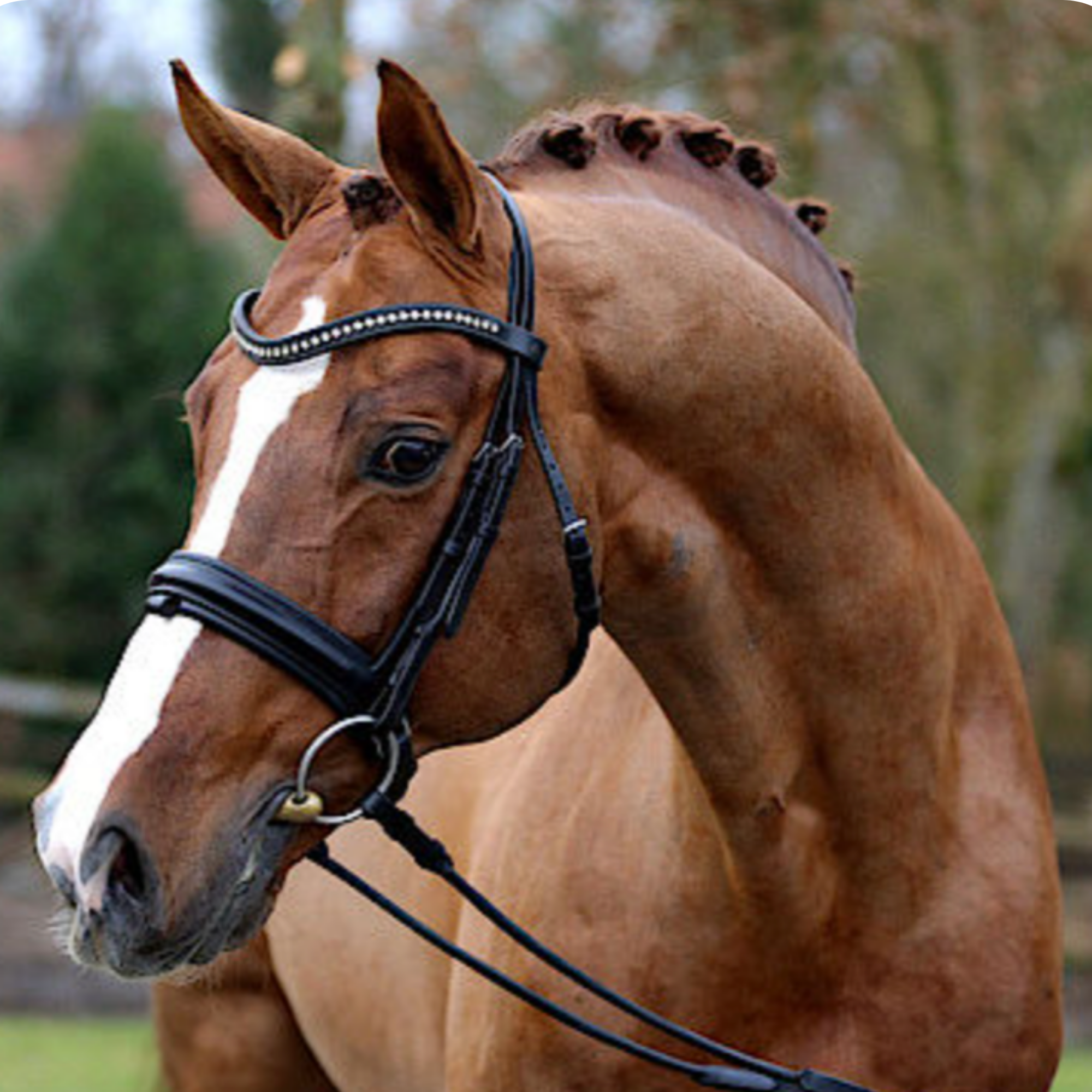 
Terms - €1500+VAT for chilled semen, allowing unlimited attempts within the season on one named mare. If the mare is certified not in foal by the end of September, there will be a 50% credit applied for the following season.

PLEASE NOTE: This stud requires advance warning for health papers - if your vet requires original health papers to arrive with the semen, we will need at least two working days' notice. Please phone the office on 01837 880 100 to discuss. Elite Stallions cannot be held responsible in the event that the semen arrives without health papers and the vet will not inseminate.

About - Belissimo M is the complete package, combining top-class talent with an excellent temperament and outstanding rideability.

Performance - Belissimo had a phenomenal young horse career, as Bundeschampion as a 4-year-old and Vice Champion as a 6-year-old. After a long break for breeding, he returned in 2011 at advanced level and won and was placed in grand prix classes under Australian Hayley Beresford; they finished best of the Australians at CDIO Aachen in 2012. Belissimo's competition career was cut short not due to injury, but by his extraordinary breeding schedule and the bankruptcy of his former owner.

As recognition of his breeding significance, Belissimo M has been honoured in a way that only a few top stallions have been, now he is allowed to perform as representative of his homeland, with the suffix NRW.  Further, the Holsteiner Verband honoured his extraordinary breeding qualities in 2010, by granting him a rare approval to breed Holsteiner mares.

Sire - Belissimo is by a rather unknown private stallion, Beltain. This stallion is very much a product of Dr Schulz-Stellenfleth’s breeding program, from the mare line that produced over 20 licensed stallions – his dam, Gänseliesel is the three quarter sister to the dam of the famous Brentano II, but unlike Brentano, Beltain never found fame in his lifetime. Injured just before the licensing, it was not clear whether he would ever be rideable and he was sold to the Karsten family in Westfalia, an area where his famous dam line was not really appreciated. Beltain recovered from his accident and Leonie Bramall, who was based with Jo Hinnemann, competed him up to grand prix, and when he was about ten years old, he was finally licensed on the basis of his success in the sport, which, in those days, happened very rarely. Beltain then stood at the Westfalian State Stud, but was not much used, and he died in 2002 before his son Belissimo put him on the map. Beltain's dam is full sister of the Celle State Stud sires Garibaldi I and II, and granddam of Wolkenstein I and II as well as of the grand prix dressage horse Little Big Man, the Celle State Stud sires Brentano I and II, as well as Beauvalais, 2002 vice world champion in Jerez, Olympic bronze medallist in Athens 2004.

Damline - Belissimo’s dam Roxa, is by the great producer of dressage horses, Romadour II, and out of a mare by the Thoroughbred Lucius. When bred to Boss, Roxa produced three successful full siblings in dressage up to advanced level: Bonnie Bianco, Baccarole and Boutique. The dam line of Welfe has also produced the performance stallions Cash and Fly, Cinamant K, and Pluco. The dash of Thoroughbred adds refinement and athleticism to the otherwise warmblood pedigree.

In addition, there are five Bundeschampions and, with Blickpunkt, there is a double bronze medal winner of the World Championship for young dressage horses in Verden. Callaho's Benicio - the eponymous hero of the 2011 Hanoverian licensing - was Bundeschampion of six-year-old dressage horses in Warendorf. Then, he also won his stallion performance test with 9.88 in dressage, scoring a 10 for walk, trot and canter.

He also sired Belandra, one of the top horses at the PSI in Ankum, selling for €572,000. Belissimo M has already over 40 licensed sons, including numerous premium stallions in Hanover (including the €310,000 top-priced Bentley), Oldenburg, Westphalia, Austria - there, Bellheim became champion stallion. Furthermore, there are already 80 state premium mares, including the champion mares of Hanover and Bavaria, as well as the 2009 champion mare of Westphalia, Brillante, and the 2011 reserve champion mare Bella Vista.

His daughter Bella Rose competed at grand prix under German ace Isabell Werth, with scores of +85% at grand prix freestyle and +80% in the grand prix and the special. This mare was also part of the gold medal-winning team at the 2014 World Equestrian Games. She repeated this success at the 2018 World Equestrian Games, 2019 Aachen and the 2019 European Championships where she achieved +90% in the kur resulting in individual and team medals.