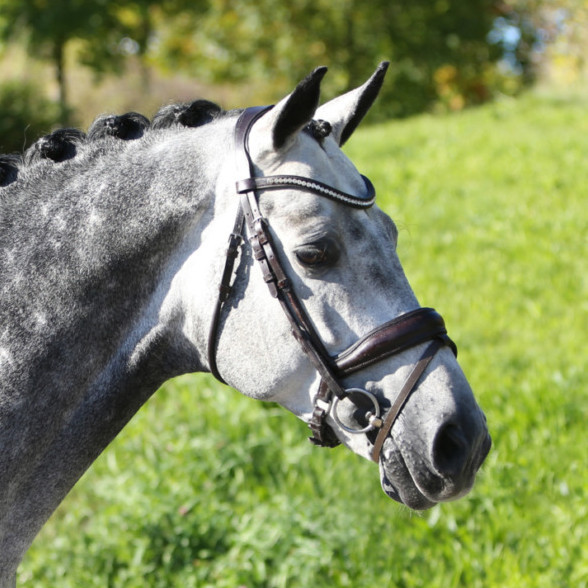 
Terms - €1000+VAT for unlimited attempts with frozen semen, on one named mare in one breeding season. If the mare is certified not in foal by the end of September, €650+VAT will be refunded.

About - The stunning winner of the 2017 Oldenburg licensing, Benefit is the epitome of the modern dressage stallion; elegant and light-footed, with a beautiful type and fantastic movement. He has a particularly good front, with a free, open shoulder and a good head-neck connection.

Sire - Belantis is a son of grand prix stallion, Bundeschampion, and performance test winner Benetton Dream. Benetton Dream scored a 10.0 for his walk at the Bundeschampionat, in addition to 9.5 for trot and canter. Belantis was reserve champion at the World Breeding Championships as a six-year-old, taking home the silver medal behind Sezuan. As a five-year-old, Belantis had already finished 4th at the World Championships on 9.2. Belantis is now competing at international small tour under Isabell Werth, scoring +73% at PSG. From his first three crops, Belantis has produced five licensed sons.

Belantis is from a strong mare line; the 'P' line has produced stars such as Quaterback, Poetin, Quindale, and Don Royal. Directly from the damline are licensed stallions Quadroneur I & II (by Quaterback), Sommerhit, the full brother of Belantis' grand dam (by Sandro Hit), and Debut (by Direx). He is always uphill and elastic, with much cadence and an active hindleg. He won the National Championships in Prussendorf in 2012, and was the champion of his performance test, scoring 10.0 for rideability from the test rider.

Damline - Benefit's dam, Sam, jumped up to 1.35m level, and her sire Sir Tender is a son of Sion, whose sire Sultan is the third sire of Johnson and also sired Geoff Billington's great jumper It's Otto. Sir Tender's damsire Contender is a versatile and hugely successful stallion, whose son Contendro I has sired Olympic-level horses in all three disciplines. Benefit's mareline has also produced the Oldenburg-licensed and premium stallion Higher Heights (by Catoki), and some promising sport horses.