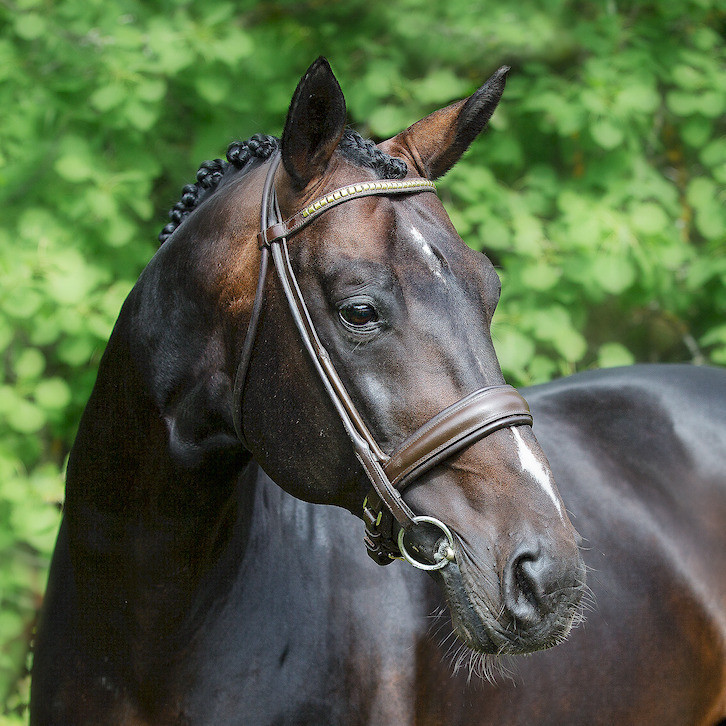 
Terms - €1000+VAT for unlimited attempts with frozen semen, for one named mare in one breeding season. If the mare is certified not in foal by the end of September, €650+VAT will be refunded.

About - Benetton Dream FRH has three exceptional gaits, a great work ethic and is wonderfully easy to ride. His offspring are much sought after for their modern type, fantastic temperament and easy rideability. He is a tall, large-framed stallion, with plenty of power and expression, freedom in the shoulder and good ground cover.

Performance - He was Bundeschampion as three-year-old, with 9.5, 9.5 and 10.0 for trot, canter and walk, and he also won his performance test on a fantastic score of 9.3. He competed at international grand prix under Tinne Vilhelmson Silfven, frequently scoring over 70%, and on his most recent appearance in 2018, he won the CDI3* Grand Prix in Wellington.

Sire - Brentano II was Hanoverian Stallion of the Year in 2003, and his dam line is one of the most important for Hanoverian breeding; the stallions Garibaldi I and II, Wolkenstein I and II and Beltain (sire of Belissimo M), and the Grand Prix star, Beauvalais are all closely related to Brentano II. He was champion of his licensing in Verden, won his performance test, and was fourth in the Bundeschampionat. Brentano's daughter Poesie is the dam of the sensational Poetin, who was twice Bundeschampion, and six-year-old World Champion, before selling for €2.5million at the 2003 PSI Auction.

Damline - Benetton Dream's damline combines three of the greatest dressage stallions, in Rubinstein (via damsire Rotspon), Donnerhall (via third sire Davignon I), and Weltmeyer. His maternal sister Fairy Belle, by Florencio, has competed at international small tour, and his dam's half-brother Daimler, by Don Davidoff, competed at grand prix, as did his grand-dam's half brother Royal Chester (by Royal Highness). The wider damline has produced the grand prix dressage horses Gambrinus and Don William, and the licensed stallions Evergreen, Winterprinz, and Showtime, plus several grand prix jumping horses.

Progeny - Benetton Dream's progeny are extremely popular, and include Isabell Werth's rising star Belantis, who produced the 2017 Oldenburg licensing champion, Benefit, before an accident forced him to be gelded. Belantis was champion of his 2011 licensing, five-year-old Bundeschampion, ans reserve six-year-old World Champion, and competed in the Louisdor Cup for developing grand prix horses in 2018.

Benetton Dream has more than 10 licensed sons, including the popular Bon Coeur, double reserve Bundeschampion, and Atterupgaards Botticelli, who was silver medallist at the Danish championships and competed at the World Championships as a five-year-old. World Young Horse Champion Don Martillo is a grandson of Benetton Dream through his dam Black Pearl, while the licensed stallions Don Baron and Don Jon also count Benetton Dream as a damsire.