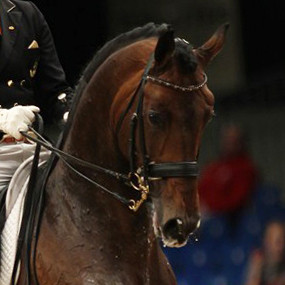 
Terms - Frozen semen €800 + VAT per dose, allowing the registration of one foal. No refund or credit will apply if the mare is not in foal.

About - Romanov is a proven grand prix stallion, from a hugely successful family. The Rohdiamant x Grundstein II cross has proven so lucrative that Romanov is one of nine full siblings, including six licensed stallions and two state premium mares. Romanov is a powerful, uphill stallion with a lot of freedom in the shoulder and a strong hindleg. He is very good in the contact, and extremely rideable, with a good, sound temperament. He has shown to be a particularly good stallion to use on Don Schufro mares - three of his five grand prix offspring boast Don Schufro as the damsire.

Performance - After having been highly dominant at the Young Horse Championships in 2004, 2005, and 2006, Romanov took another step forward in 2007 and made his debut in small tour dressage at the international show in Lingen, Germany, where he was second in the prix st. georges and fourth in the inter I. He went on to win the Intermediaire I at the World Cup qualifier in Odense and won his grand prix debut as an eight-year-old at the Herning stallion licensing in 2008. Romanov proceeded to have a remarkable international career; he has finished in the top ten of a World Cup qualifer on nine occasions, including second at Odense, on a score of +80%, and third at Stockholm, and in 2013 he was part of the silver-medal-winning team at the European Championships in Herning, finishing 13th individually having scored +73% in the grand prix special. It is a testament to Romanov's rideability that he has been competed successfully at international level by three different riders over the course of his career. In 2008 he was awarded the VTV Dressage Stallion of the Year, which is given to young stallions that have achieved remarkable results in both sport and breeding.

Damline - Rumirell descends from one of German breeding's strongest performance dam lines, linking directly back to the international eventing mare Rudilore II (aka Chica). With this mare, Harli Seifert has established her successful breeding programme where this dam line has produced internationally esteemed jumper stallions like Gio Granno, Conterno Grande, Couleur Rubin and Couleur Rouge and dressage stallions like D-Day, Don Chico, Trantris, not forgetting Romanov's five licensed brothers; Rubin Royal OLD, Rubin Action, Rumicello, Rubino Vincento, and Rockefeller. Damsire Grundstein II is known for passing on talent for dressage as well as jumping, and his offspring have competed at both the WEG and the Olympics. Third sire Akzent II is known as a great damsire of many stallions, including the leading sire, De Niro.

Progeny - At the Danish stallion licensing in 2008 his son Blue Hors Rosoff became premium stallion and stood out as an exemplary Danish Warmblood stallion with type, movement and pedigree that hardly gets any better. Romanov is also a good sire of mares; three of the top six mares at the Rastede elite mare show were by Romanov. Also at the Elite Mare Show at Vilhelmsborg, Romanov made his impact with six daughters that were awarded a silver medal and three awarded a bronze medal. In 2008 the son of Romanov, Skovens Rafael, became 4-year-old Champion Dressage Stallion at the licensing and later on became a supreme Young Dressage Horse Champion. At the qualifier for the Young Horse Championship for 5-year-old dressage horses in Herning 2009, the highest score of 910 points was been achieved by the Romanov son Hoennerups Driver, who is now competing at grand prix, as are four other Romanov sons. He has also produced 13 licensed stallions, four of them being awarded premiums, among them Skovens Rafael and Alive, both competing internationally at small tour level.