Fantastic stallion with rideability in spades 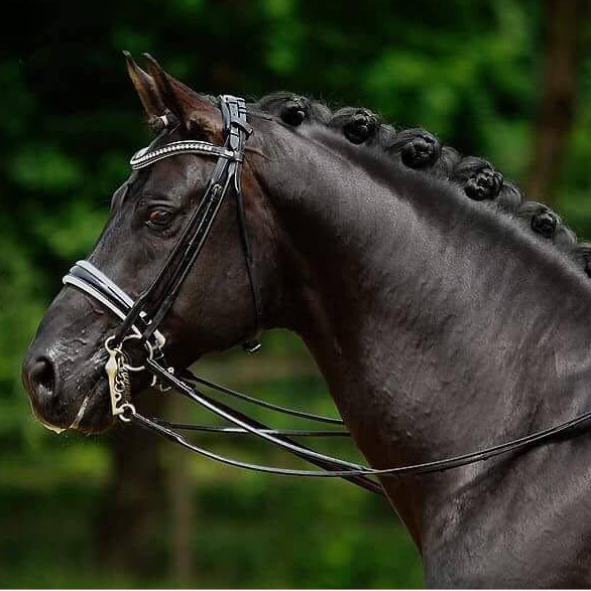 
Terms - €1350+VAT for unlimited attempts with frozen semen for one named mare in one breeding season. If the mare is certified not in foal by the end of September €1000 plus VAT will be refunded.

About - Bon Coeur has great elasticity, powerful yet light and airy gaits.

Performance- He was a premium stallion in Verden 2014, and won his 30-day test in Schlieckau in a very strong field with total points of 9.1 for his gaits. During the 30-day test, he was rewarded with the maximum of 10.0 several times. Bon Coeur has been awarded 9.0 multiple times for rideability during qualifiers to the Bundeshampionat. He was also champion in Hannover 2016 and was, both as a 3-year and 4-year-old Reserve-Bundeschampion in Warendorf. He was awarded the Weltmeyer Prize 2017, from the Hanoverian Association for his magnificent year in the sport. In September 2018, Bon Coeur made his first start in Sweden. He had an impressive 93% in the 6-year-old test, with a 10 for future prospects. In January 2020 Bon Coeur made a start at international small tour with +71% in Wellington, Florida.

Sire- Benetton Dream was Bundeschampion as three-year-old, with 9.5, 9.5 and 10.0 for trot, canter and walk, and he also won his performance test on a fantastic score of 9.3. He competed at international grand prix under Tinne Vilhelmson Silfven, frequently scoring over 70%, and on his most recent appearance in 2018, he won the CDI3* Grand Prix in Wellington. His sire Brentano II was Hanoverian Stallion of the Year in 2003, and his dam line is one of the most important for Hanoverian breeding; the stallions Garibaldi I and II, Wolkenstein I and II and Beltain (sire of Belissimo M), and the Grand Prix star, Beauvalais are all closely related to Brentano II. He was champion of his licensing in Verden, won his performance test, and was fourth in the Bundeschampionat. Brentano's daughter Poesie is the dam of the sensational Poetin, who was twice Bundeschampion, and six-year-old World Champion, before selling for €2.5million at the 2003 PSI Auction.

Damline - Performance pedigree can also be found on the granddam side through Carismo, e. Calypso II. The jump bloodlines further back in the pedigree have certainly had an impact on the strong active canter and great hind-legs. Calypso II sired some very successful dressage horses, especially in combination with Bon Coeur's damsire Sandro Hit, who is one of the most influential sires of his generation.

Progeny - From his first few foal crops, Bon Coeur already has more than a dozen licensed sons, including four who were awarded premium status. His foals have been very popular at the auctions, have already made a strong impression on several of Europe’s top dressage riders. The most expensive foal at the elite auction in Munich, July 2018, was sired by Bon Coeur. In August 2018, Bon Coeur had a total of 24 sons for the preview in Hanover. They have a good type, and are tall and strong foals with excellent movement and confident temperaments. In 2020 Bon Coeur was the sire to the record breaking KWPN Champion Stallion 'Bloomberg' (Bon Coeur x Don Index).