A premium stallion who made a huge impression in his licensing. 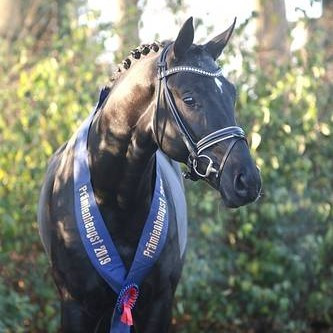 
Terms - €1000 + VAT for unlimited attempts with chilled semen on one named mare during the season. If the mare is certified not in foal by the 30th September, €600 +VAT will be refunded.

About -  With his striking looks and fantastic conformation, Bon Joker impresses everyone who lays eyes on him. He has all the potential to become a star, with the strong foundations which he possesses. With very impressive and correct basic gaits, on the occasion of the licensing Bon Joker's lunge work was one of the highlights of the event:

Performance - The premium stallion Bon Joker started his young sire career at the Oldenburg Körtage 2019, in Vechta, with a bang. Having blown the judges away with his exceptional paces and technqiue, he was awarded a premium with high praise from the judges.

Sire - Father Bon Coeur, son of Grand Prix winner Benetton Dream, was a premium stallion in Verden 2014, and won his 30-day test in Schlieckau in a very strong field with total points of 9.1 for his gaits. During the 30-day test, he was rewarded with the maximum of 10.0 several times. Bon Coeur has been awarded 9.0 multiple times for rideability during qualifiers to the Bundeshampionat. He was also champion in Hannover 2016 and was, both as a 3-year and 4-year-old Reserve-Bundeschampion in Warendorf. He was awarded the Weltmeyer Prize 2017, from the Hanoverian Association for his magnificent year in the sport. In September 2018, Bon Coeur made his first start in Sweden. He had an impressive 93% in the 6-year-old test, with a 10 for future prospects. In January 2020 Bon Coeur made a start at international small tour with +71% in Wellington, Florida.

Damline - Both his dam and grandam were decorated with the state premium. His damsire Furstenball was regional and national champion of Germany,  winner of S level dressage classes, 2013 VTV stallion of the year, and number 1 of the FN breeding valuation throughout Germany in 2015. Bon Joker's third generation is the Grand Prix winner Rubin Royal who is a legendary sire to many champion horses to date, having ranked eigth on the WBFSH Sire Rankings for 2019. He competed at international grand prix, winning the Kür at La Mandria and placing at Aachen, Dortmund and Stuttgart, among others.