Charming and rideable - top 2 words to describe this upcoming stallion! 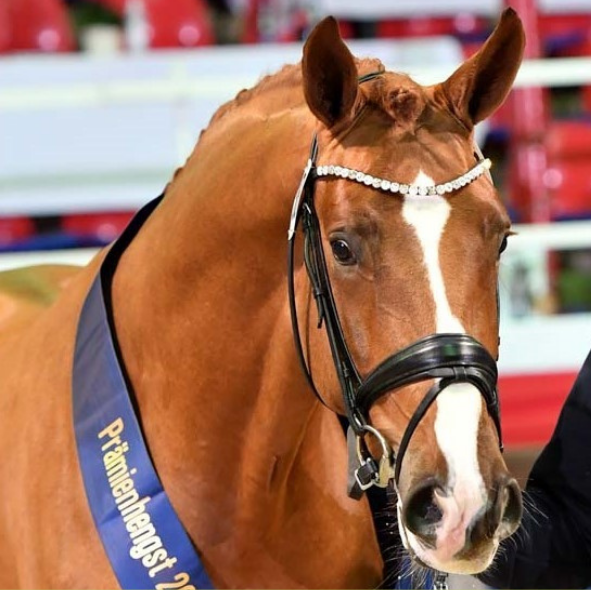 
Terms - €600 + VAT for unlimited attempts with chilled semen in one breeding season. If the mare is certified not in foal by the end of September €300 + VAT will be refunded.

About & Performance - Bowmore is a stunning stallion of the highest quality, with very correct conformation and superb basic gaits. He was a premium stallion and one of the price peaks at the 2020 Oldenburg Stallion Days in Vechta. By the ultimate progenator Bordeaux, this horse holds many of the qualities which make the sire so special, with great rideability, charming looks this stallion is likely to go far in both breeding and sport.

Sire - Bordeaux's pedigree is an absolute rarity, bred from one of the most successful dam lines in the world. The best of the Holstein, Oldenburg, Westphalia and Trakehner populations are united into this charming, rideable stallion. After winning at the KWPN licensing in 2009, Bordeaux then won the stallion performance test in Ermelo. In 2012, he placed fourth with Eva Möller in the final of the World Championships for six-year old dressage horses in Verden. In winter 2012 & 2013 Bordeaux qualified with victories in the KWPN stallion series. He is currently Holland's most successful dressage stallion of his age-group. Under Möller Bordeaux was trained to developing grand prix level and represented Norway at the 2017 European Championship under Isabel Freese-Bache.

Damline - The dam Fantastic delivered the international dressage horse Sephora S / Patrick van der Meer (NED) with Sir Donnerhall II. Great-granddam Batida produced the licensed stallion Freestyle (USA) with Frappant. Her sire Bolero, who had a high percentage of noble blood and who had a strong visual influence on Bowmore, was a stallion of epoch-making importance whose line is still in full bloom today. The dam's sire, Fürst Piccolo, was a premium stallion at the NRW main licensing in 1999, won the stallion performance test in Warendorf in 2000 and was promoted to advanced level. Fürst Piccolo is one of the most tried and tested sires of NRW breeding.