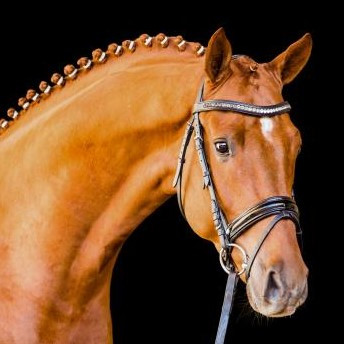 
Terms: €750+VAT for unlimited attempts with chilled semen for one named mare in one breeding season.  If the mare is certified not in foal before the end of September a 50% credit will be applied the following year to use on any stallion from the same stud. If the first AI of the year was 1st July or later, then the credit in the event of non-pregnancy is 100%.

About & Performance - Brixton is a very promising chestnut stallion not only due to his pedigree but also due to his exterior factors. His elegant presentation, always balanced in his movements, with a powerful, energetic sequence of gaits, this premium stallion has all the qualities of a top sire. With his competition debut in 2020, this talented stallion also impressed with victories and placings in riding horse tests and dressage horse tests.

Sire - In 2015 Borsalino received the best final score of the dressage stallions at his 30 day performance test. In 2017 he finished his sports horse test with the final score of 8.87 and 9.5 points for rideability. In 2018 two of his sons from his first year were licensed. 7 foals were sold at the autumnal auction for an average price of 28,600 Euros. In 2019 Barcelona by Borsalino-Danone I-Friendship (breeder: Michael Schenk, Römsted) became vice championesse at the German National Young Horse Championships in Warendorf. Bellisima (Borsalino-Distelzar-De Niro) and Bond Girl (Borsalino-De Niro-Weltmeyer) were awarded premium at the Herward-von-der Decken Show and were sold for top prices at the auction in Medingen.

Damline - This noble man comes from an exceptional dam line. None other than state stallion Don Frederico emerges from this famous line. But not only that, this strain also produced the trademark stallions Lanthan, Gordon and Big Ben. Damsire His Highness was the Hanoverian undisputed licensing champion in 2002. At the Danish licensing in 2005, he was proclaimed champion of the four-year-old dressage stallions. He was champion at his stallion performance test in Prussendorf in 2003, receiving a total score of 149.24. His outstanding quality was rewarded with the dressage index of 155.04, the highest score in this class, and he received 106.67 in jumping with 9’s and 10 for rideability.