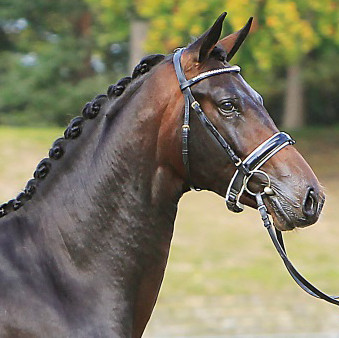 
Terms - €950+VAT for unlimited attempts with chilled semen for one named mare in one breeding season.  If the mare is certified not in foal before the end of September a 50% credit will be applied the following year to use on any stallion from the same stud. If the first AI of the year was 1st July or later, then the credit in the event of non-pregnancy is 100%.

Frozen semen is also available for €600 plus VAT per dose allowing the registration of one foal.

About - Buckingham is an exciting young stallion from proven grand prix dressage lines, with a dash of jumping blood in the third line for added athleticism and power. He is an impressive performer, with a willing, trainable temperament and a lovely character. He was the stunning winner of his performance test in Adelheisdorf, scoring a 9.0 or 9.5 an unbelievable 15 times.

Sire - Sire Bordeaux's pedigree is an absolute rarity, bred from one of the most successful dam lines in the world. The best of the Holstein, Oldenburg, Westphalia and Trakehner populations are united into this charming, rideable stallion. After winning at the KWPN licensing in 2009, Bordeaux then won the stallion performance test in Ermelo. In 2012, he placed fourth with Eva Möller in the final of the World Championships for six-year old dressage horses in Verden. In winter 2012 & 2013 Bordeaux qualified with victories in the KWPN stallion series. He is currently Holland's most successful dressage stallion of his age-group. Bordeaux's sire, United, finished his performance test in Ermelo with the highest results ever recorded at the time: 9.5 for trot, canter and dressage ability. United's sire Krack C and damsire Partout were both international grand prix horses under Dutch supremo Anky van Grunsven, while the jumping blood of Flemmingh adds athleticism and connection. Bordeaux's dam line combines two great stallions. The Trakehner Gribaldi, sire of former World Champion and world record holder Totilas, and Donnerhall, one of the most successful progenitors of grand prix dressage horses of all time. Gribaldi is also the sire of Painted Black and Hofrat, among many others. His sire Kostolany was champion of his Trakehner licensing, and in 2009 was Trakehner Stallion of the Year. He was also the sire of Silvermoon, father of Blue Hors Matine, the individual silver medallist at the Kentucky World Equestrian Games. Donnerhall's most famous son De Niro is the WBFSH top ranked sire for 2016. Bordeaux is also a descendant of the Westphalian foundation lineage of Dodona, which produced the Olympic champions Ahlerich and Rembrandt, as well as the foundation stallion Rubinstein I and Olympic silver medallist Amon.

Damline - Damsire Rousseau is one of the top stallions for producing rideable offspring, with easy, kind temperaments. In 2007, he had the highest dressage index of any KWPN stallion on a score of 181. He is a tall, large-framed stallion with plenty of bone and a strong shoulder, with a well-connected topline. Rousseau had a stellar young horse career; Dutch National Champion as a four-year-old, reserve the following year, and a silver medal at the World Young Horse Championships as a five-year-old. He also won the 2001 KWPN Stallion performance testing, and under Dutch rider Nicolette van Lierop, he won the 2002 Pavo Cup Finals and 2002 & 2003 KWPN Stallion Competitions.

Rousseau's sire Ferro is a dressage legend, who competed at the highest level, including at the Olympics and European Championships under Coby van Balen, and then went on to become one of dressage's major foundation sires. He produced a dressage dynasty, with his most notable offspring being - among others - Negro, Kennedy, Metall and Rhodium. He has more than 35 licensed sons and is grandsire of many gold medallists including Uthopia and Valegro. Rousseau's damsire Roemer has the impressive accolade of having not only competed at grand prix dressage, but also having jumped to 1.40m level. At least three of his sons also jumped at grand prix, including the licensed stallion Boy-B, while six sons reach grand prix dressage, among them Winston and Darwin, both licensed with the KWPN. His dam Zsuzsa had such an excellent temperament that her owner's daughter rode her to her wedding!

Rousseau's offspring have been exceptional. From 2006-2008, Rousseau produced three successive KWPN licensing champions (Wamberto, Zack, and Ampere), a feat never accomplised by any stallion before or since. All three performed outstanding performance tests and are now successful stallions in their own right. He has also produced the Hanoverian performance test champion, Fiorano, who has scored +71% at international grand prix, and the Celle State Stud stallion Fürst Rousseau. All of his offspring have scored fantastic marks for temperament, rideability, paces and type, with the KWPN noting that the trot is light-footed, balanced and with much cadence. Rousseau really stamps his foals with his type and character.

Buckingham's mare line has produced two other licensed stallions, A Lucky One and Casanova, and the grand prix jumping mare Vivena MH.