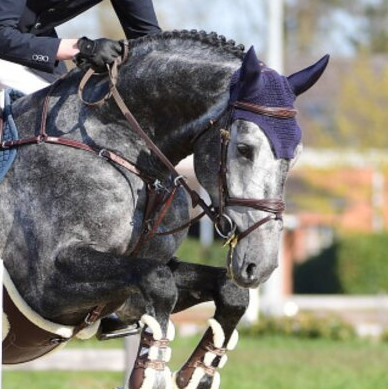 
Terms- €850 +VAT for unlimited attempts with chilled semen on one named mare in one breeding season, if the mare is certified not in foal by the end of September €500 +VAT will be refunded.

About-  Cardentos is a very modern son of jumping horse sire Cardento. The stallion characterized by long lines embodies refinement and modernity, with the impressive grey’s eye and expression clearly revealing the Arabian influence through Ramzes.

Sire- Cardento had a very impressive sport career under his  rider, Sweden’s Peter Eriksson. The combination won silver with the Swedish team at the Arnhem Europeans, the Athens Olympics and the Jerez de la Frontera WEG. They claimed several wins at Nations Cup and grand prix level, including the Gera, Helsinborg, and Holte grands prix with the big-framed grey always standing out for his tremendous ability and exceptional rideability when negotiating a course.

Cardento has top quality offspring in Sweden as well as in the Netherlands. 2014 saw six Cardento sons and daughters compete at the Caen WEG. For years, Cardento offspring dominated the Swedish Young Horse Championship. In the Netherlands, his sons Corporal VDL, Carrera VDL, Dakar VDL, and Grand Slam VDL have been licensed for breeding.

Other than highly successful stallions, numerous show jumping offspring at 1.60m level like Cash up and Cash and Go out of Car dentos’ second dam, Nanny, or Cordea by Caretino out of his third dam testify to this damline’s genetic strength and reliability.