A winner in his first year! 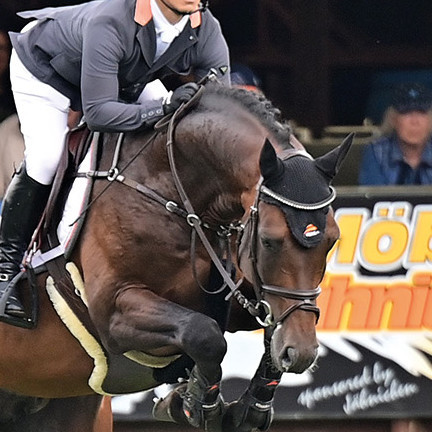 About - A winning type right from the start. Casalou PS achieved no less than nine victories in jumping horse competitions of classes A and L with grades up to 9.0 in his first course season with Jana Fink and Eiken Sato/JPN in the saddle. This stallion has a lot of attitude and strength and completed his HLP 2021 in Adelheidsdorf with a total of 8.63 as reserve winner behind his station neighbour Chaccothage Blue PS.

Sire - The father Casallco won the Grand Prix of Opglabbeek/BEL under Philip Rüping, was second in Paderborn, fourth in Riesenbeck, seventh in the Grand Prix of Lastrup and went double zero in the Nations Cup of Drammen/NOR. Thus, the path of our OS reserve winner,  HLP ideal jumper (three times the dream grade 10) and Bundeschampionat qualifiers clearly points to the absolute domination of the sport, just like that of his descendants, to whom he gives his performance qualities.  Several sons of Casallco were licensed, including the OS winner stallion, HLP jumping winner and in the international youngster tour successful Cavoiro – H OLD/Tobias Meyer. In the starting blocks are the Oldenburg and Vice Deister Jumping Champion Casa Lady Love PS/Lennard Runge (6yny), the Hanoverian Vice Jumping Champion Cosima/Harm Wiebusch, the Federal Championship Seventh and via the P.S.I. auction sold Casallbertin/Patrick Stühlmeyer (6yn), the Vice Deister Jumping Champion Cajulio and the third-placed Conny Blue PS. Cristo/Hergen Forkert, Caskkato TW/Scott Dollemore/GBR and Cajulio/Simon Nizri/MEX are already on the road internationally. The Casallco daughter St.Pr.St. Casalena became the second reserve winner mare at the Westfälische Eliteschau. Also highly rated on the 1c rank: Caramba.

Damline - From the mother Balcanna come other offspring with successes in jumping horse competitions as well as the international 1.45 meter jumping horse Livellouet (v. Livello).

Mother father Balou du Rouet, even successful in heavy jumping, fathered the Olympic team silver winner Baloutinue/Laura Kraut/USA, the World Championship individual and European Championship team bronze winner as well as World Cup eighth Bianca/Steve Guerdat/SUI, the European Championship team third Saura de Fondcombe/Nadja Peter Steiner/SUI as well as the individual bronze winner of the Eventing European Championships Corouet/Sarah Bullimore/GBR. He is not only by far the most successful son of his famous father, the Olympic champion and three-time World Cup winner Baloubet du Rouet, but is also currently back in the top 15 and top twelve of the world's best jumping and eventing sires according to WBFSH.

In the pedigree, the two evergreens Kannan and Quick Star follow.