An interesting jumping stallion from the damline of Stedinger 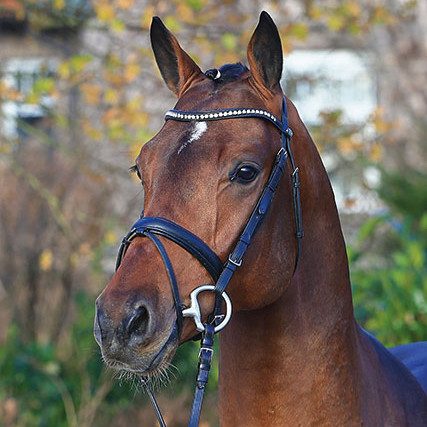 
Terms - €1300+VAT for unlimited attempts with chilled semen, on one named mare in one breeding season. If the mare is certified not in foal by the end of September, a 100% credit applies the following year to use on any stallion from the same stud.

About - Casino Grande is one of Sosath's premier stallions; the "embodiment of our breeding goals". With his good looks, great conformation and modern type, he is an exciting prospect for breeding and sport. He has limitless scope, an excellent technique and a wonderful temperament.

Performance - He was awarded a premium at his 2014 Oldenburg licensing and finished third overall. At his 30-day performance test in 2015, he finished with a final jumping score of 9.25, with 10.0 for his jumping ability as well as his outstanding canter, and a 9.25 for his rideability. In 2016, he competed in young horse classes for the first time, with many victories. He was awarded the reserve Hauptprämie in recognition of his outstanding first crop and his great sport performance. At his sport test, he finished second, behind stablemate Ogano, on a final score of 9.03, including a 9.5 for his canter and a 9.0 for his scope and rideability.

Sire - Casino Berlin scored 9.0 for his free jumping at his 70 day test, and started his career under saddle in 2012 with several placings in age classes. The following year, he qualified for the Bundeschampionat and was Vice-Champion of Oldenburg at Rastede. As an eight-year-old, Casino Berlin was successful in international jumping classes; his biggest achievement so far was being runner-up in the grand prix at CSI Steinhagen. His sire Caspar (competed as Eurocommerce Berlin) was a very successful jumping stallion. Ridden by Gerco Schröder, this top sire was part of the winning team of the European and World Championships from Mannheim (2007) and Aachen (2008). Caspar combines the two grand prix sire Cassini I and Caretino, both outstanding sires and sport horses in their own right. Out of Casino Berlin's dam line there are several highly successful show jumpers. His dam Landora was a multiple winner in show jumping, and has also produced the licensed stallion Casirus, a year younger than Casino Berlin. The grand-dam Carola is the full sister of the internationally successful horse Carlos. Other successful ancestors of the family are Banda de Hus by Argentinus, who was successful internationally with Kevin Staut, Green Cotton (by Barley Hill xx) the 1993 Event Horse State Champion, and Rubinrot, by Rubinstein, 2002 bronze medalist at the World Championships for Young Dressage Horses and 2003 winner of the Swedish Championships.

Damline - Damsire Contact Me jumped up to 1.50m level internationally, and is a son of the great Carthago Z, who jumped in the Atlanta (1996) and Sydney (2000) Olympics, won the Nations Cup in Aachen, Rotterdam and La Baule as well as numerous grands prix under Jos Lansink. He has sired more than 160 grand prix jumpers, and has more than 100 licensed sons, including Old Chap Tame, Cartani, Carthino Z, Coltaire Z, Looping D’Elle, and Nartago. He combines the two great 'C' lines of Capitol I and Calando I, a son of the great Cor de la Bryère.

Casino Grande's dam Baccara is a half-sister of the hugely successful dressage stallions Stedinger (by Sandro Hit) and Donninger (by Donnerschwee). Another sibling, the state premium mare Bold Lady (also by Donnerschwee), has produced the licensed stallions Quaterbold du Payrol and Adoro. Bold Fantasy is a full sister of the dressage stallion Lamar H and half-sister to the successful three day eventer Just Me H, who has won at CIC** and was German champion in 2004 with Anna Christina Döring. Casino Grande's dam line is one of the most successful of the Oldenburg breeding association. Offspring from this dam line include Tailormade Mr. Pink (by De Niro), who is successful up to Intermediaire I, the approved Waldsee by Waldschütz, and the PSG horses Basic Instinct (by De Niro) and Satchmo (by Santiago).

Progeny - Casino Grande's first offspring are convincing with their modern type, good looks and great canter. At the Sosath foal show, the breeding director Dr. Wolfgang Schulze-Schleppinghoff complimented their great movement, remarking that "they trot like the dressage horses should these days". Lars Gehrmann, breeding director of the Trakehner association, described the winning colt by Casino Grande (out of a Stalypso x Caprilli mare) at the Lemwerder foal championship as follows: "A first class foal with a great type, prime attitude, very noble neck, always uphill with an outstanding canter - everything fits perfectly together."