Out of the internationally successful Conthina PS 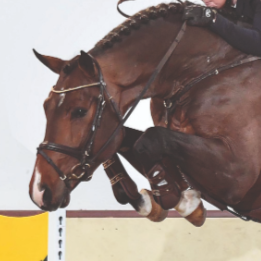 About & Performance -  A look at the pedigree of this elite show jumper is enough to inspire! His manner, his scope, his caution and his overall superiority put Chaccothage Blue PS in the spotlight as a sire. His world renowned bloodlines include jumpers such as Chacco Blue who won multiple Grand Prix shows and has sired countless internationally successful offspring. His dam jumped internationally and her bloodlines are teaming with prolific proginators such as Conthargos and Contender.

Sire - Chacco-Blue was third in the Grand Prix of Aachen and won the Grand Prix of Neumünster. The success of his offspring placed him amongst the top ten of the world's best show jumping sires for the first time in 2015. Since 2017, he has led the ranking of the world breeding federation WBFSH. His most successful offspring include the Vice European Champion and Global Champions Tour winner Explosion W/Ben Maher/GBR, the European Team Champion Chaqui Z/Shane Sweetnam/IRL and Grand Prix winner Chacna/Enrique Gonzalez/MEX. The latter was one of eight of Chacco-Blue’s offspring who took part in the 2018 World Equestrian Games in Tryon/USA. Almost 50 of his sons have been licensed.

Damline - Conthina PS is successful in 1.45m show jumping competitions with Patrick Stühlmeyer. The first of her offspring, Londontimes PS (by London) and Chacoothargos PS (by Chacoon Blue), are winning young horse classes for show jumping horses. Conthargos has produced numerous top horses. Tailormade Contou was third in the Grand Prix of Herzlake with Sören Pedersen/DEN, Conchento PS was placed second with Luciana Diniz/POR in the Grand Prix of Vilamoura/POR, Pia Contra won the Grand Prix of Leon/MEX with Nicolas Pizarro/MEX.

His grand-dam Leomitage was internationally successful in 1.45m show jumping competitions under her sport name Aloubette. She was sold at the P.S.I. auction in 2013 and produced other international show jumping horses such as Conmitage. His great-grand-sire is the Argentinus son Armitage, who won 1.50m show jumping competitions with Marcus Ehning and later with Guido Klatte. The latter pair also won the gold medal at the German Junior Championships in 2011.