The top ranking stallion in the FEI Nations Cup. 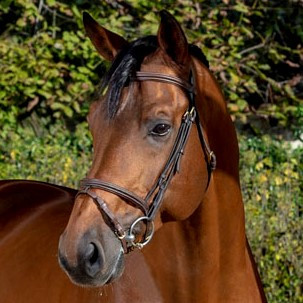 About - Chaclot, an Oldenburger stallion bred by Gestut Lewitz, is the son of the famous Chacco-Blue, protagonist of many international results including the 3rd place in the Grand Prix of Aachen. Chaclot is increasingly renowned as Chacco-Blue’s most alike progeny both from a characteristic and jumping technique point of view as well as his performance attitude. Chaclot competes for Team Italia with Riccardo Pisani and in the 2018 season established himself as one of the best jumpers in Italy, showing off in the FEI Nations Cup Final in Barcelona, marking one of the four double clear rounds.

Performance - Chaclot's international career reflex his talents in sport perfectly, as he competes for Team Italia with Riccardo Pisani and in the 2018 season established himself as one of the best jumpers in Italy, showing off in the in the FEI Nations Cup Final in Barcelona in 2018 and ranking first individually. Chaclot and Riccardo compete successfully in the most important CSI4 *, CSI5 * and CSIO including Gijon (SPA), Hickstead (GBR), Barcelona (SPA) and the Longines FEI World Cup.

Sire - The Mecklenburg sire Chacco-Blue was successful internationally at grand prix level with Alois Pollmann-Schweckhorst and Andreas Kreuzer, winning the 2012 Neumünster grand prix, among others. He sired more than 30 licensed sons and 119 advanced level/S level show jumpers, who have so far won more than €747,000. Chacco-Blue was the best-represented stallion at the 2015 European Championships, despite having died three years earlier aged just 14, after a long battle with borreliosis (Lyme disease).

Damline - The dam of Chaclot Flying P. is the daughter of the Hanoverian stallion Fly High I, son of the great champion and stallion For Pleasure for the maternal line from Loraine, producer of internationally active horses; Pirett, an active mare in sport, is from the great stallion Pilot, the first stallion whose products have reached the threshold of one million German marks in prize money.