Top stallion who has proven himself at numerous World Cups. 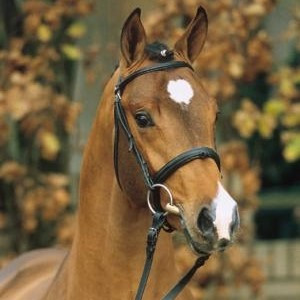 
Terms - €1750+VAT for unlimited attempts with chilled semen, for one named mare in one breeding season. If the mare is certified not in foal at the end of September, €1250+VAT will be refunded. If the mare is certified in foal at the end of September, but subsequently dies, aborts or reabsorbs the foal, or the foal dies before 24hours, the covering will carry over the the next season to be used against any stallion at the same stud, and the mare can change going into a new year.

About - 2009 and 2010 Winner of a Bundeschampionat qualifier with a score of 9.2 in 2008 Check In's career got off to a great start, in 2005 he became the OS Reserve Champion Stallion, finished his 30-day test in Redefin with a final score of 9.08 with emphasis on jumping, was awarded the I-b premium in 2007, won a Bundeschampionat qualifier with a score of 9.2 in 2008 and has meanwhile collected ribbons in the international Youngster Tour. He has proved himself in many 5*,World Cup and World Cup Equestrian Games under the saddle of Sam Mcintosh.

Sire - Cordalmé Z, who died in 2010 at the age of 24 won Nations Prizes with Gilbert Böckmann. Among his 13 licensed sons, Couleur Rubin who placed in World Cups with Ludger Beerbaum, stands out in particular. He also sired two Olympic Game participants: Careful in Sydney/AUS in 2000 and Casper in Athens/GRE in 2004. His daughter Walmeria took the OS Champion Mare title in Vechta and Corlanda OLD became the Vice World Champion in the class for seven-year old show jumpers under Mario Stevens.

Progeny - His progeny speak for themselves, with a selection of premium foals who catch the eye of many at auctions, 2 of which were from his first crop. He has produced state premium mares and licensed son out of a Calido I mare won the Dutch Warmblood Silver Medal.