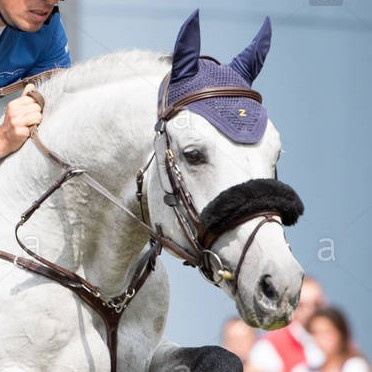 About - Clintrexo Z was approved by Zangersheide as a three year old and from 2018 he has been ridden by Christian Ahlmann. A few months later, the pair won their first international Grand Prix in Wiesbaden. His dam also produced Dakota (Denver V), who also competes at Grand Prix level under British colors, and is the maternal half-sister to three approved stallions and six international performers including Pius Schwizer's great mount, Chidame Z (Chippendale Z). Clintrexo Z is a stallion with a huge amount of talent which he has shown at mutliple sporting events.

Performance - Clintextro has been focusing prodominantly on sport throughout his career but due to the lack of shows in 2020 he is available for breeding. He was a World Champion finalist as a 5 year old, finished 5th in Salzburg 4* Grand Prx with rider Judy Ann Melchior. With Christian Ahlmann he has many winnings such as Wiesbaden and Munster Grand Prix, Treffen 5* Grand Prix. He was runner up in the Global Champions Tour in Berlin, runner up at the European Championships, and third at the Rolex Top 10 Final in 2019.

Sire - Clintissimo's sire, Clinton I was an international jumper for many years and was 4th with Thomas Voss in the Grand Prix of Aachen. Clinton’s world-class qualities are a result of his strong pedigree, sired by the Corrado I out of a dam by Masetto, which carries the genes of both Moltke and Cottage Son xx. Clinton’s great-grandsire is the world-famous Landgraf I, whose in uence is still enormous. In addition, Clinton’s granddam Ohra jumped successfully at international level, named ‘Olympia’. Ridden by Karsten Huck and Dirk Schröder she won over 50.000 German MarksClintissimo's full sister Chica Bay (shepherdess), is the mother of the jumping phenomenon Levisto Z and from the same family as Zandor Z.

Damline - Rexotta Z has only produced one offspring besides Clintrexo which is Dakota (Denver x Rex Z) who had competed at 1.40m internationally. Dam sire Rex Z who was bred by Zangersheide jumped up to 1.50m with rider Jos Lansink and Ricardo Keirkgaard, his progeny are proving successful in sport. He has licensed sons competing up to 1.60 and Keur mare Moonfee (Rex Z x Triton).