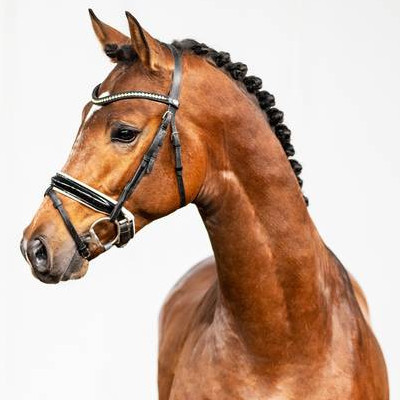 
Terms-  €800 + VAT for unlimited attempts with chilled semen on one named mare for one breeding season. If the mare is certified 'not in foal' before Sept 30th, €500 +VAT will be refunded.

About- Beautiful in type and with movement. Even as a foal, the Westphalian Clive Christian was among the top of the year. At the German Foal Championships in Lienen, he secured a top place in the lot of colts, and then paraded as an elite auction foal in Münster/Handorf. Two years later, his path led him back to Münster, to the main licensing of the Westphalian horse stud book. With his dreamy face, an outstanding self-confidence and the most generous tactfulness, he took the hearts of the audience by storm. Clive Christian has never left the slightest doubt about his outstanding basic quality, which makes him appear particularly valuable for sport and breeding.

Sire- Sire Christ has made a name for himself as a supplier of talented dressage horses for the highest demands. Even highly placed several times in the advanced level arena, he can look back on 29 licensed sons to date. Genetically, through his father, the Calypso II grandson Competent, the show jumper Picard and the thoroughbred Daimyo xx, he provides both the bloodline diversity that is urgently needed and the desired blood connection. His most successful children include the licensed Cadeau Noir (Lena Waldmann), the Grand Prix winner Candescent (Alice Tarjan) with her brilliant movements and the Grand Prix crack Chrysler (Delia Eggenberger).

Damline- The dam Scarlett is a daughter of the Sandro Hit son Scolari. Scolari sired 24 horses with successes in the dressage arena in advanced level, his daughter Schöne Scarlett won silver in the final of the Nürnberger Burgpokal in 2021. Clive Christian's full sister Carlotta D, born in 2013, passed an outstanding mare performance test with a final score of 8.42 (rideability 9.0!). The Grand Prix successful Warendorf state stud stallion Laureus and the versatile performance sire Diamantino follow in the pedigree.