The great winner of the Aachen Grand Prix 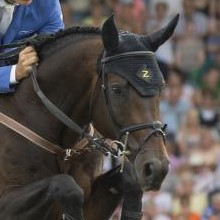 
Terms: €1600 + VAT for unlimited attempts in one breeding season for one named mare. If the mare is certified not in foal at the end September, €1200 + VAT will be refunded.

PLEASE NOTE: Codex One  is only collected  Monday, Wednesday and Friday.

About - Winner of the legendary Grand Prix of Aachen, winner of the 5* Global Champions Tour GPs of Valkenswaard, Hamburg, Berlin, winner of the GP in Basel, the World Cup in Stuttgart, the list goes on and on. Codex One Z has a track record of sport results which makes him one of the most iconic horses in the world. Together, the Christian and Codex team jumped to more than € 1,500,000 in prize money!

Performance - Codex One Z began his international career under Karl Brocks to 4th place at the World Championships for Young Horses in Lanaken as a 7-year-old. In 2011 Christian Ahlmann took over the reins and at rocket speed they transformed into one of the most triumphant combinations in the history of show jumping. Nations Cups, World Cups, European Championships, World Equestrian Games and the Olympic Games... Codex One Z knows every competition ground and championship!

Sire - Contendro won a premium at the 1999 Holstein licensing, and was champion of his performance test in 2000. He was placed in the 4yr old National Championships, and qualified for the 5yr old Bundeschampionat His full brother Contendro II has jumped up to grand prix and is also a licensed stallion. His grand sire Contender was reserve Hauptprämie winner in Oldenburg on the basis of his excellent first crop of foals. He has 127 licensed sons and 498 offspring competing in sport; 25 of his licensed sons also jumped at grand prix.

Damline - His damsire Glueckspilz has a number of licensed stallions and many offpsring competing internationally at Grand Prix, in both showjumping and dressage giving Codex One interesting bloodlines and ability.

Progeny - Codex One was not actively used for breeding during his sports career so he has very limited offspring. Although limited in number they are proving to be very impressive, showcased by Curious George who is currently competing under Laura Kraut, I Am Codex and approved stallion Cantona.