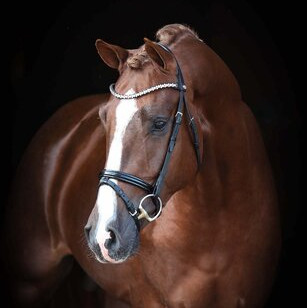 
Terms -  €700 + VAT for unlimited attempts with chilled semen on one named mare in one breeding season, if the mare is scanned not in foal by the end of September €400 + VAT will be refunded.

About & Performance - Coeur Rouge, premium stallion of the OS Licensing 2021 has already attracted attention on the triangular track and also convinced in free jumping with his overview and a good attitude. This large-lined Conthargos – Casall son is a stallion with a lot of expression and excellent manner in the jump.

Sire - His father Conthargos was very successful in his short sporting career and his descendants can be found on all tournament courts in the world, so recently Cosa Nostra (Alberto Michan) was victorious in Wellington, Conchento PS with Luciana Diniz second in the Grand Prix in Villamoura, Concollon PS with his rider L. Klaphake second in the Youngster Tour in Aachen. Conthargos offspring can always be found among the runners-up in the jumping horse tests.

Damline - The mother, Classic Time descends from the exception of sports and breeding stallion Casall, who was able to win everything in his sporting career and finished it worthily with a victory in the Global Champions Tour stage in Hamburg. From a breeding point of view, a high percentage of his offspring are successful in the heavy class, e.b. Austria with Kent Farrington, Caracas with Jos Verlooy, Chesall Zimequest and Simon Delestre, H&M Chilli Willi and Nicola Philippaerts to mention just a few.