The winner of the German Masters with offspring following in his footsteps. 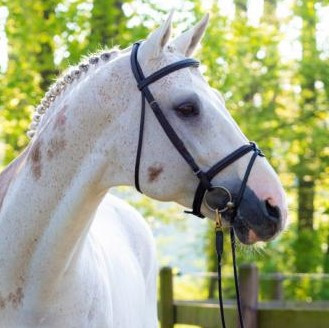 About -The good-looking Coriano Z son was Holstein-bred and that makes him exceptionally suited for breeding with French, Belgian and Dutch mares who are looking for a scopey, quick-thinking stallion. What´s more, Colorit Z unfailingly passes on his good model and mentality to his offspring This stallion with his unique colouring is represented in top sport by dozens of offspring.

Performance - He won the German Masters in Stuttgart, won in Berlin, Paris, Braunschweig, Hagen and Mannheim and in total brought home hundreds of thousands of Euros under his riders Christian Ahlmann and before him, David Will. The most well-known of them is probably Emily Moffitt’s beautiful, white Carlson 86 who competes at 1.60m level. These multiple titles prove how talented this stallion is.

Sire - The successful Holsteiner sport and breeding stallion Coriano Z  In the period 2002-2003 he successfully started in the show jumping sport with Judy-Ann Melchior. He is known for his great combination of a rideable yet athletic stallion who made his debut winning gold in the Belgium Junior Championship in 2003

Damline -  His damsire Capitol I is a real rarity in the ranks of Holsteiner stallions, is he related to Landgraf which means he adds variety into any breeding programme founded on those lines. Capitol's grand-dam Vase was champion mare of Holstein, while her full-brother, Roman, topped the German showjumping standings for two years running with Hans-Gunter Winkler. Vase’s daughter, Folia, by Maximus (himself an advanced showjumper), foaled five stallions: Latus I and II (both by Landgraf), and then Capitol. Capitol was by Capitano, who is by Corporal out of Retina. Retina won the Hamburg Derby with Fritz Thiedemann in the saddle. Capitol produced more than 50 grand prix horses, and his offspring include Carthago Z, Cassini I, Carolus II, Indoctro, and A-Cover Girl

Progeny - Colorit has over 18 offspring jumping at 1.45cm or more and include Carlson and Colour Paint.