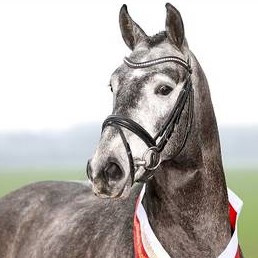 
Terms: €1000 +VAT for unlimited attempts with chilled semen, for one named mare in one breeding season. If the mare is certified not in foal before the end of September, €600 +VAT will be refunded.

About & Performance - Condoctro is a highly promising sire entering the breeding scene. Born in the Netherlands, he’s been licensed and awarded a Premium in Münster-Handorf. His characteristics are an athletic type, strong basic gaits, a canter with a lot of power and good conformation ensuring powerful movement and jump. Condoctro‘s way of jumping is very careful, his scope seems to be limitless. Both as a breeding stallion and a sports horse, all doors should stand wide open for him.

Sire - Cornet Obolensky was second reserve champion and the spectators' darling at his 2002 Westphalian licensing. Then, at his 30 day test in Münster-Handorf in 2002, Cornet Obolensky left his competitors far behind, with a score of 9.24 in the partial index for jumping. The judges even gave him the maximum score of 10.0 for loose-jumping. In 2011, Cornet Obolensky won the gold medal with the German team at the European Championships in Madrid. In 2012, he won the World Cup qualifier in Zürich, the Nations Cups in Rome and Rotterdam, and was recognised as the most successful show jumper in Germany. Under Marco Kutscher, he won grands prix and Nations Cup competitions, including the Samsung Super League final in Barcelona, which he won twice. In 2008, he took home bronze at the German National Championship and won grands prix in Balve and Cervia, as well as in the Nations Cup competition in Rotterdam. He was also a member of the German Olympic team in Hong Kong. In 2009, he was second in the Bordeaux World Cup qualifer, third in the grand prix competition in Rio de Janeiro and was placed in the Global Champions Tour Final in Doha. His lifetime earnings are approximately €800,000.

Damline - His damsire Indoctro is a living legend and is among the world's best sires. His offspring achieve successes at the highest level. At the Olympic Games in 2008, three horses by Indoctro attended: VDL Orestus, Don Porfirio and Picolien Zeldenrust. In Holland he is known as VDL Indoctro, while in Germany, following the Holstein naming custom, he is C-Indoctro. By any name he is one of the world’s most successful jumping sires. After being Champion of his stallion test, Indoctro went on to a successful international jumping career with Ulrich Kirchhoff. His main value has been as a breeding stallion, standing as one of VDL's foundation sires. Indoctro has been such a success as a sire for the KWPN studbook, that at the age of 16 he received the title: ‘Preferent’.