A rising star in the international scene. 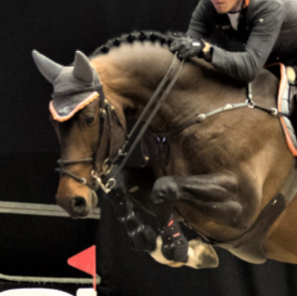 
Terms  - €1500+VAT, allowing unlimited attempts with chilled or frozen semen, for one named mare in one breeding season. If the mare is certified not pregnant before the end of September then a 50% credit applies to spend on a Schockemoehle / Helgstrand covering the following year. If the first AI of the year is July 1st or later, the credit the following year is 100%.

Please note: Schockemöhle prioritise mares on site in Germany for chilled semen from their stallions, so popular stallions may be unavailable in the peak of the season with no notice. We advise that you also have a second-choice stallion in mind also standing at Schockemöhle, in case your first-choice stallion cannot be supplied.

About & Performance - Continental Blue has had a perfect start to the season for the Upcoming Star of the international scene: This great stallion competes under Philip Rüping, the son of Conthargos took first place in the heavily competitive Grand Prix of Neumünster and Herning / DEN. In doing so, he seamlessly continued the successes of 2018 and 19. Continental Blue debuted in jumping competitions at the age of four. At the age of five he won series competitions in show jumping tests. At the age of six, the first successes in international junior horse competitions were added. Then the jump into the difficult class was effortless.

Sire - Conthargos is one of the leading stallions in breeding, he has sired a number of top horses including the Nations Cup winner Concona who is ridden by Ben Maher. In 2008, Conthargos was the easy winner of the strong Dobrock tournament with a score of 9.5, and effortlessly qualified for the Bundeschampionat. He has now taken a step back in his jumping career to focus on his breeding talents having produced tall, strong horses, very athletic and with exceptional rideability and trainability.

Damline - Congolda Blue PS (by Contendros) also descends from the mother Chagolda, who achieved her first international successes of up to 1.40 meters with Koki Saito / JPN at the age of seven. In second place in the pedigree is the elite stallion Chacco-Blue, himself a son of Holsteiner Chambertin out of a Contender Godavari xx dam and several times bred to the line founder Cor de la Bryère. He was third in the Aachen Grand Prix and won the Neumünster Grand Prix. In 2015, the success of his offspring catapulted him into the top ten of the world's best jumping sires for the first time. Since 2017 he has even been leading this ranking by the World Breeding Association WBFSH. His most successful descendants include Ben Mahers / GBR Vice European Champion and Global Champions Tour winner Explosion W, Shane Sweetnams / IRL European Team Champion Chaqui Z and Enrique Gonzalez / MEX Grand Prix winner Chacna. The latter was one of a total of eight Chacco Blue offspring at the 2018 World Equestrian Games in Tryon / USA.