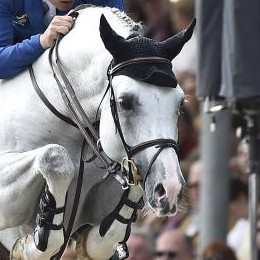 
Terms - €1000+VAT for unlimited attempts with chilled semen on one named mare in one breeding season. If the mare is certified not in foal by the end of September, €700 + VAT will be refunded.

About & Performance - Cornado II Z really boosted Team Ahlmann and flew around the world, from Canada to China, noting one top result after another. The pair won the CSI5* GP of Dinard, came 3rd in the GCT of Shanghai and excelled in the CSI5* GP of Estoril and the World Cup of Mechelen!

Performance - Cornado competed in the World Cup in Helsinki with Christian Ahlmann jumped double clear and placing 7th overall, he breifly took a break from sport to focus on his breeding career however after the season he was fourth in the Global Champions Tour of Paris and Estoril, finished third in the Winning Round.  The pair won the CSI5* GP of Dinard, came 3rd in the GCT of Shanghai and excelled in the CSI5* GP of Estoril and the World Cup of Mechelen!

Sire - He was second reserve champion and the spectators' darling at his 2002 Westphalian licensing. Then, at his 30 day test in Münster-Handorf in 2002, Cornet Obolensky left his competitors far behind, with a score of 9.24 in the partial index for jumping. The judges even gave him the maximum score of 10.0 for loose-jumping. In 2011, Cornet Obolensky won the gold medal with the German team at the European Championships in Madrid. In 2012, he won the World Cup qualifier in Zürich, the Nations Cups in Rome and Rotterdam, and was recognised as the most successful show jumper in Germany. Under Marco Kutscher, he won grands prix and Nations Cup competitions, including the Samsung Super League final in Barcelona, which he won twice. In 2008, he took home bronze at the German National Championship and won grands prix in Balve and Cervia, as well as in the Nations Cup competition in Rotterdam. He was also a member of the German Olympic team in Hong Kong. In 2009, he was second in the Bordeaux World Cup qualifer, third in the grand prix competition in Rio de Janeiro and was placed in the Global Champions Tour Final in Doha. His lifetime earnings are approximately €800,000.

Damline - Dam Acobata has also produced licensed stallion Cornado I who has also competed succesfully at high profile Grand Prix shows under Marcus Ehning the pair had successes at World Cup events, featuring in the World Equestrian Games in Caen and were also a part of the German team in the Olympic Games in Rio. With a top percentage of his offspring gaining FEI there is no doubt the talents of this amazing damline. Grand-dam Athena.