A phenomenal stallion, unparalleled in sport or breeding 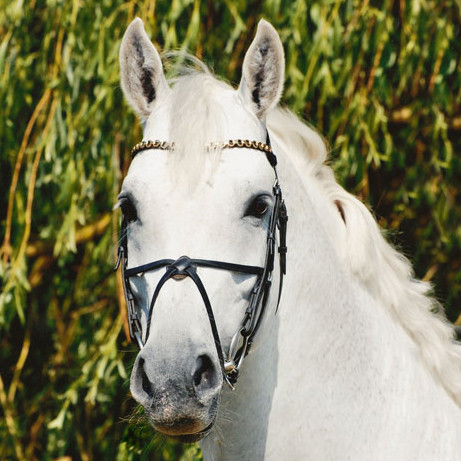 About - Cornet Obolensky needs no introduction; he has dominated the sport and breeding world for over a decade. Phenomenally successful as both a sport and breeding stallion, he is still as popular for breeding today as he was at the height of his international career. His good looks, temperament and outstanding technique and scope, and that of his offspring, have seen him counted amongst the best stallions in the world for heritability and reliability. Today, his children and grand-children fly the Cornet Obolensky flag at the top level all over the globe. In 2012, the BWP awarded him the title "Ambassador", and he is currently fifth in the WBFSH Sire Rankings for 2016.

Performance - He was second reserve champion and the spectators' darling at his 2002 Westphalian licensing. Then, at his 30 day test in Münster-Handorf in 2002, Cornet Obolensky left his competitors far behind, with a score of 9.24 in the partial index for jumping. The judges even gave him the maximum score of 10.0 for loose-jumping. In 2011, Cornet Obolensky won the gold medal with the German team at the European Championships in Madrid. In 2012, he won the World Cup qualifier in Zürich, the Nations Cups in Rome and Rotterdam, and was recognised as the most successful show jumper in Germany. Under Marco Kutscher, he won grands prix and Nations Cup competitions, including the Samsung Super League final in Barcelona, which he won twice. In 2008, he took home bronze at the German National Championship and won grands prix in Balve and Cervia, as well as in the Nations Cup competition in Rotterdam. He was also a member of the German Olympic team in Hong Kong. In 2009, he was second in the Bordeaux World Cup qualifer, third in the grand prix competition in Rio de Janeiro and was placed in the Global Champions Tour Final in Doha. His lifetime earnings are approximately €800,000.

Sire - Cornet Obolensky's talent for show jumping was predestined by his first class pedigree. His sire, Clinton, is one of the world's elite jumpers; under Dirk Demeersman, he was fourth individually at the 2004 Athens Olympic Games, and in 2005 they were on the fifth-placed Belgian team at the European Championships in San Patrignano. Clinton was second in the Aachen grand prix, fourth in the Rome grand prix and competed at the 2004 Athens Olympic Games. In total, Clinton has produced 70 grand prix jumping horses and over 60 licensed sons, and his full sister MS Franziska is the dam of grand prix jumper and licensed stallion Contact Van De Heffinck, while other mares from the same dam have also produced licensed sons and grand prix jumpers.

Damline - The damsire, Heartbreaker, a successful World Cup horse under Peter Geerink, is by the Dutch trademark stallion, Nimmerdor. Cornet Obolensky's dam, Rabanna van Costersveld, was a Grade A jumper in Great Britain. The granddam, Holiva van Costersveld, was a successful advanced level jumper and when bred later to Feinschnitt I, she produced Querido, who placed at international level.

Progeny - His most successful son, Cornet D’Amour, was formerly the top horse in the world on the FEI rankings. Winner of the 2014 World Cup Final, double silver medallist at the 2015 European Championships, fourth individually in 2013, sixth at the World Equestrian Games; the list of Cornet D'Amour's international successes is long. His other offspring include Cornado NRW, Cristallo I, Conte Bellini, Cornet's Cristallo, Cocoshynsky, Colestus and Cornetto King - more than 60 Cornet Obolensky offspring are jumping at grand prix and he has more than 80 licensed sons, while 194 of them have won or been placed in advanced level competitions. His offspring's lifetime earnings are over €1.8million. At the 2016 World Cup Final, the winner Corbinian, second placed Cornado NRW and equal-third placed Cornet D'Amour were all by Cornet Obolensky - proof that this great grey stallion is incomparable.