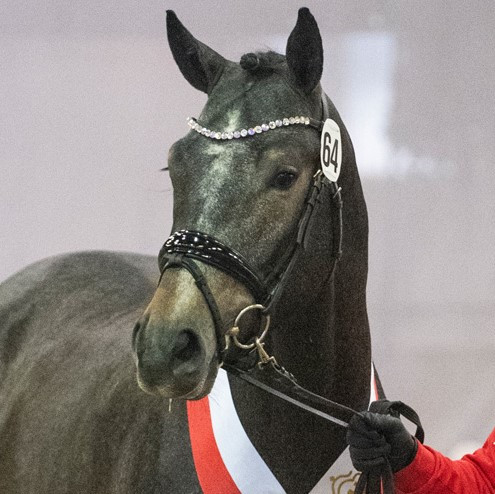 
Terms - €800+VAT for unlimited attempts with chilled semen, for one named mare in one breeding season. If the mare is certified not in foal by the end of September, €400+VAT will be refunded and the remaining amount will be credited for the following season.

About & Performance - Cortez FZ, the reigning 1st reserve champion stallion of the Westphalian main licensing, who not only demonstrated his amazing jumping abilities in the show jumping series, but also in the first individual jump. "A well developed, large-framed stallion," said licensing commissioner Thomas Münch, summarizing the enthusiasm of the licensing commission in his comment. "Even with the preselection with the natural jump and always moving through the body."

Sire - Cornet Obolensky competed in the 2008 Olympics at the young age of nine. He is a foundation stallion in the breeding of modern jumping horses, and is currently ranked third in the 2016 WBFSH Sire Rankings. The total earnings of his offspring, including former World Number One Cornet D'Amour, Cornado NRW, Cornet's Cristallo, Cocoshynsky, Cornetto King, and Comme Il Faut, are over €3.7 million. The Clinton/Heartbreaker cross is a proven formula that has produced multiple grand prix jumpers including Cordess and Consul DL Vie Z, and 18 licensed stallions.

Damline - The dam's sire, Eurocommerce Canturano, placed in international jumping classes for the Netherlands. One of his most successful offspring is the WEG and Nations Cup team fourth DaimlerI. Osiris (by Dallas VDL), who is successful in 1.30 m jumping, comes from the second dam, Isabelle FZ. The pedigree includes the stallion sizes Acodetto I, Carneval and Frostwind. The Belgian great-granddam Isanca was successful in 1.40 m show jumping tests herself and produced eight sport offspring.