A talented young stallion who is the incredible combination of Dominator and Aganix. 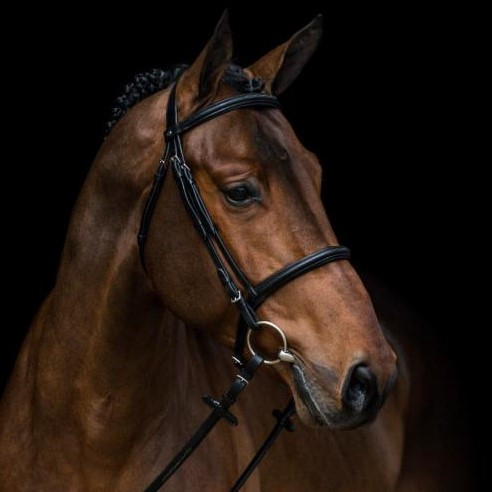 
Terms - €1000+VAT for three attempts at frozen semen, to achieve one pregnancy with no refund or credit if the mare is not in foal.

About & Performance- D’Aganix 2000 Z is Dominator Z´s very first offspring. More than that, at breeder Tony Foriers´ Stud he was born in the same stable as Dominator Z himself. D’Aganix is the spitting image of his father and he is a fast learner and impresses over the jump with his scope and reflexes. D’Aganix Z´s sport career took off in a spectacular way and being just a 5-year-old he excelled during the Belgian stallion competitions as well as at the WC for Young Horses. Even at his young age D'Aganix is proving that his impeccable bloodlines are enabling his limitless ability, in 2020 he has made apprearances at a number of 1.20m shows and he demonstrated how he has the ability and mind to be a great showjumper.

Sire - Dominator Z combines the best of French and Holstein breeding, and the Thoroughbred Feenspross in the fourth generation adds the essential dash of blood into the pedigree. He has has been produced carefully, with the future in mind. As a young horse, he jumped at the World Championships in Lanaken, placing 7th in the second round, and he has already picked up placings internationally at 1.40-1.60m level.

Damline - Dam Andiamixa Hero Z in her turn is one of the oldest Aganix du Seigneur Z daughters and the full sister of the international jumpers Andiamix Hero Z and Andiamix II Hero Z. Via Andiamo Z this out-and-out sport pedigree is connected to the lineage of Peter Wylde’s HH Radco. His damsire Aganix du Seigneur has made a number of appearances at high class shows, in 2014 he was successful in the Stal Oosterbrook Prize with rider Jos Lansink, over the years he has jumped at CS13* Van den Boogaard Snelvervoer Prix, CSI4* Provincie Noord-Holland, and CSI2* Mariënheem.