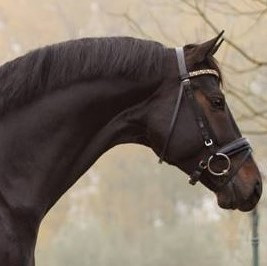 
Terms - €900 +VAT for unlimited attempts with frozen semen on one named mare in one breeding season, if the mare is scanned not in foal by the end of September €600 +VAT will be refunded.

About & Performance- Daily Diamond was approved in Verden and became performance test champion of the KWPN with the highest scores in every section. This up and coming stallion has the reputation to produce talented and often very expensive foals based on the great qualities he presents. Sire Daily Deal is a great stallion training at Grand Prix and his damline consists of excellent bloodlines.

Sire -  Reserve Champion of the 20th NRW licensing in Münster-Handorf 2010. There was a lot expected of him at his 30-day test in Münster-Handorf in 2011 and were not disappointed. In the meantime, Daily Deal won and placed with the best in advanced level dressage tests under Sabine Rueben and is now a promising talent in the ring. Grandsire Diamond Hit was both Vice World Champion and Vice Bundeschampion of five-year old dressage horses in 2002. Later, Diamond Hit succeeded at advanced level on the international parquet. With Emma Hindle he placed in the Grand Prix of Aachen, Wiesbaden and Stadl Paura and is also time-tested as sire of excellent dressage horses and significant stallions.

Damline - Daily Diamond‘s mother Fairytale has excellent bloodlines with Fürst Heinrich and Wolkentanz II. Combined with Damon Hill she has already brought Damon‘s Dream (3-year-old German champion 2013). Damsire Fürst Heinrich was the impressive 2003 winner of the World Championship of Five Year Old Dressage Horses, and he has produced many first-rate horses despite his untimely death as a seven-year-old. He is high up on the FN breeding index with a score of 151, and is the sire of Woodlander Farouche, who was double World Young Horse Champion and is unbeaten at international small tour.