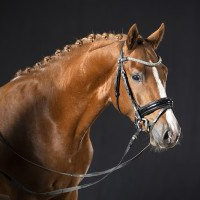 
Terms- €700+VAT for unlimited attempts with chilled semen, for one named mare in one breeding season. If the mare is certified not in foal by the end of September, €450+VAT will be refunded.

About & Performance-  Dallmayr's first public appearance on the occasion of the qualification for the German Foal Championships at the Kasselmann farm was spectacular: 10 times he was aware a 10.0, twice the 9.5! His appearance at the riding pony licensing in 2017 in the fully subscribed Niedersachsenhalle in Verden was spectacular, astonishing and delighting the audience. In 2019 he completed the HLP sport test in Münster Handorf as the best in the test, currently Dallmayr K shines as a series winner in elementary level dressage horse tests.

Dallmayr combines four of the best dam lines in Germany in his pedigree, which is unparalleled!

Sire- Dimensional H v. Like his father, Dimension AT is a household name in German pony breeding! He was champion of the German Foal Championships 2012 in Lienen. Reserve Champion Stallion 2014 Alsfeld - Hessen of the German riding pony stallions, Oldenburg State Champion 2016 in Rastede, Vice Federal Champion 2016 of the four-year-old German riding pony stallions in Warendorf, Dimensional H is now successful in FEI sport.

Progeny-  The first offspring have already been ridden and give rise to great hopes for the upcoming championships!