Unbelievably strong moving stallion, with a lot of presence and power 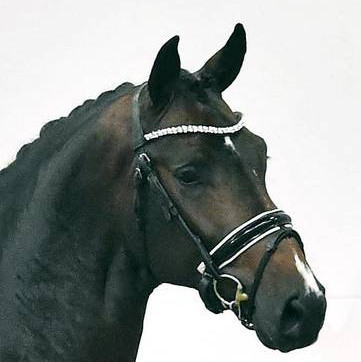 
Terms- €800+VAT for unlimited attempts with chilled semen on one named mare during the season. If the mare is certified not in foal by the 30th September, €500 +VAT will be refunded.

About- An unbelievably strong moving stallion, with a lot of presence and  power. On the lunge as well as in free running, he revealed that he was able to inherit the championship quality of his father Dancier Gold FRH in all three basic gaits. Like father, like son: Even during his time under the saddle, Dancing Gold shows exactly that unshakeable willingness to perform with optimal rideability values that also make his father a Grand Prix talent of rarely seen quality.

Sire- Dancier Gold FRH,the Dancier/Weltmeyer son passed an outstanding sport test in Münster/ Handorf in 2020 with a dressage final score of 9.24. Dancer Gold FRH and his trainer Simone Pearce were also able to demonstrate this quality in tournament sports at each of their performances. In 2020 and 2021, they each qualified for the Bundeschampionat of German dressage horses with a clear victory. They won the qualification in Elmlohe in 2021 with a dream ride (9.0). At the World Championships for young dressage horses in 2021, they took third place in the qualification and sixth place in the strong final.

Damline- Dancing Gold's dam Landliebe is a daughter of the Dimaggio son Detroit, who, after a series of victories in riding and dressage horse ability tests with top marks, switched to Anna Zibrandtsen as a sports stallion in Denmark, where he is now internationally successful in Grand Prix. Genetically, he unites the very popular young horse world champion Dimaggio as sire with the Intermediary I-placed Lord Liberty G as dam's sire. Dancing Gold's mare line is based in Westphalia through the second mother Lena. Lena has a lot of precious blood in the first two generations via the Lauries Crusador xx son Laomedon and the thoroughbred Playmate xx. Her father Laomedon left behind several highly successful dressage horses, above all his son Legolas, who won team bronze for the USA with Steffen Peters at the 2016 Olympic Games in Rio de Janiero.