Danone: On his father's road to success! 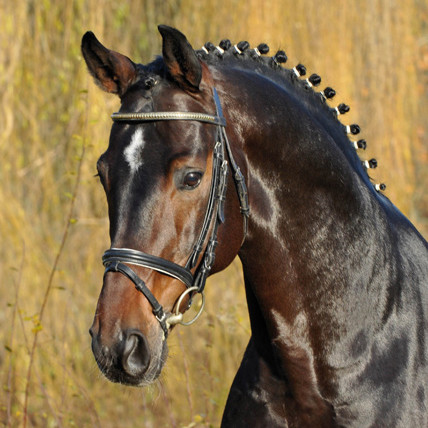 
Terms: €1200 + VAT per frozen dose allowing the registration of one foal. If the mare is certified not in foal there is no refund or credit due.

About- Optimally uphill, long legged and correct stature. Danone is the capital king of movement, his great ability for collection is visible in every step- which he passes on to his offspring.

Performance- Finalist of WCYH in 2006, in 2009 his son Dante Weltino sold for 130,000 euros and was the vice champion of the stallion licensing in Vechta. In 2012, Danone and Theresa Wahler were victorious at Grand Prix level. In 2019, his son Damaschino became German National Young Horse Champion of the three year old stallions. He was second to none at his 50-day stalion performance test. Damaschino Il was licensed in Verden.

Sire - De Niro needs no introduction. In 2016, he topped the WBFSH Sire Rankings for the fourth time. De Niro has enjoyed a phenomenal career in both sport and breeding; he has produced countless grand prix horses, winning medals at the highest levels. His son Desperados FRH has been a key member of the German team for several seasons. Desperados has won three team golds (Herning 2013, WEG 2014, Rio 2016), one team silver (London 2012), one team bronze (Aachen 2015), double individual silver (Aachen 2015) and an individual bronze (Rio Olympics 2016). In his eight championship appearances, Desperados has finished in the top five on seven occasions, and has never scored below 70% at international level under Kristina Bröring-Sprehe. The De Niro/Weltmeyer cross has also produced Delgado (individual bronze, Aachen 2015), Super Nova II (team silver, Rio 2016), and Danone I's full brothers Danone II (now deceased) and Der Designer, both winners at Inter II.

Damline - The dam Well Done produded two full brothers of Danone I, as well as a state premium daughter and a further son who competed at advanced. The damline has produced the stallions Golan, Magic Boy, Feuerbrand, Whitney and Peugeot HPF.

Progeny - In 2009, Danone provided a premium stallion in Verden who sold for €320,000, and Dante Weltino, who sold for €130,000 and qualified for the Olympic Games in 2016. In 2014, his sons Desperados, Danönchen and Dante Weltino all qualified for the final of the Nürnberger Burgpokal, and in 2015 Der Kleine Lord competed at the European Championships. Dante Weltino was 11th at the 2019 European Championships and has scored over 80% in grand prix freestyle- on several occasions.

2019 his son Damaschino became the Bundeschampion of the 3-year-old stallions and was the clear winner in the 50-day test. 2020 Donnybrook v. Danone - Hohenstein bred by Horst Hestermann, is the top horse at the auction at the Klosterhof for €310,000.