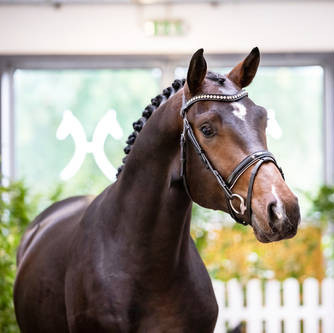 
Terms- €800 +VAT for unlimited attempts with chilled semen, for one named mare in one breeding season. If the mare is certified not in foal before the end of September, €500 +VAT will be refunded.

About- An Extremely charming Hanoverian newcomer from the Verden licensing, superior in every phase. Dante Wow descends from the only crop of the much-discussed but early retired stallion Dante's Junior. He us a fantastically appealing type - even at first glance, He has three good basic gaits with a very active hind leg that steps well below the center of gravity, paired with balance and willingness to perform on the lunge line, he is sure to have promise for a successful career under the saddle.

Damline-  The mother Zara has the world-class athlete and sire Zack as a sire. The champion stallion at the KWPN licensing matured into a three-time championship horse in Denmark (Daniel Bachmann Andersen and Nanna Skodborg Merrald).

As a breeding stallion, he enjoys heroic status as the sire of many Grand Prix horses and stallion sons. Dante Wow's second dam is a daughter of the stallion Spielberg, who is a grandson of the world number one (WBFSH) Sandro Hit via Sunny Boy.

Spielberg is regarded as a supplier of highly talented Grand Prix horses (e.g. Suppenkasper) and occupies a respectable eighth place in the WBFSH ranking of the best dressage sires in 2021. The third dam Danubia II has the stallion Domburg twice in her pedigree, who is excellently bred via Donnerhall and Pik Bube I.