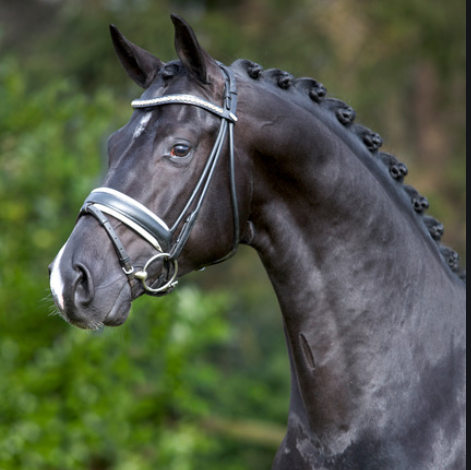 
Terms - €1000 +VAT for unlimited attempts with frozen semen on one named mare in one breeding season, if the mare is scanned not in foal by the end of September €700 +VAT will be refunded.

About & Performance - Under the saddle of Hans Peter Minderhoud the pair continue their sporting career in a promising way, as he proved in 2017 at the Pavo Cup final and in the stallion competition. With his beautiful moves and great rideability he has everything he needs to develop into a horse for the highest level. Given his own talent and strong origines, Dettori is a valuable asset for breeding.

Sire - At the start of his career at his performance test, Desperado scored 89.5, including a 9.5 for the canter. At the World Championships in Verden, Desperado was 7th in the 5-year-old final with a score of 16.6, and 8th in the 6-year-old final on a score of 8.3. He competed successfully at national level at PSG and Inter I. Desperado has made a fantastic start to his international grand prix career including winning Mechelen World Cup Freestyle with +85%.

Damline - Dettori’s dam is the Hannoverian mare Diamond Eye, of which the KWPN has written a positive mother report. She is sired by the Grand Prix dressage legend De Niro, who has established his name in breeding thanks to an unprecedented number of offspring at the highest level, including the famous Desperados, Delgado, Glock’s Voice and D’Agostino. Besides De Niro, the stallion in the third generation, Warkant, was also proclaimed Stallion of the Year in Hannover. This is due to top horses such as Wansuela Suerte, Wunschtraum and Wahajama. Granddam World of Magic produced, among others, the international junior horse Perfect Ronneby (by Rousseau) with whom Kristina Sober won several times.