Young stallion with all the technique of International sire. 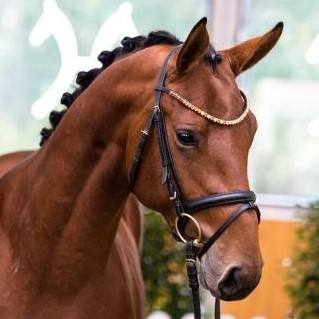 
Terms: €650+VAT for unlimited attempts with chilled semen for one named mare in one breeding season.  If the mare is certified not in foal before the end of September then you get a 50% credit the following year to use on any stallion from the same stud. If the first AI of the year was 1st July or later, then the credit in the event of non-pregnancy is 100%.

About & Performance - A stallion ready to perform and equipped with enormous basic elasticity, plus fantastic technique. Father Diamant de Plaisir can look back on an unparalleled career - at the beginning of 2020, just eight years old, he and Holger Wulschner placed in the Grand Prix of Abu Dhabi, Dubai and numerous other competitions on the Emirates Tour.

Sire - Diamant de Plaisir was the winner of his licensing in Finland in 2015, is remarkably easy to ride and shows his potential on course. He won his first show in May 2016 and became Hanoverian Young Jumper's Champion of the 4-year-olds with an exceptional mark of 9.3 in August 2016. In 2017, Diamant de Plaisir won qualifications for the "Bundeschampionat" of the 5-year-old jumpers and was one of the favourites for the title. At the Bundeschampionat, he won the first qualification with marks of 9.0 and 9.3 and finished 7th in the Big Final. In 2018, he placed several times in 1.30m and 1.35m jumping classes and qualified for the "Bundeschampionat" for 6-year-old jumper and was placed at the World Breeding Championships in Lanaken, Belgium. In the end of the outdoor season, the dream team won the Youngster Tour at CSI Paderborn and was awarded as the best 7-year-old show jumper in all Equiline youngster classes of 2019. In the beginning of 2020,  the 8-year-old Diamant de Plaisir and Holger Wulschner showed at the Arabian circuit. They got several great results and were placed in the Grand Prixs of Abu Dhabi and Dubai.

Damline - Diamant de Cador's mother Hann.Pr. Cadoria won the 2014 free jumping championships in Verden and his grandmother, St.Pr.St. Fetzi, is the mother of the world class horse Fit for Fun, who celebrated numerous victories in Grand Prix with Luciana Diniz. Dam sire Cador was placed in Grand Prix up to 1.55m, including 6th in a 1.40m class at the prestigious Hamburg GCT, and 8th in the Oldenburg CSI2* grand prix. As a youngster, Cador was leased to “De Ijzereman” in the Netherlands for two years. After returning home to Hof Sosath, he competed at the national championships in Rastede and came 3rd in the Oldenburger Landeschampionat. Only two weeks later, he was champion of the 4-year-old horses in the “Deister-Cup” with a score of 8.9.