A new son a Diarado from a grand prix damline 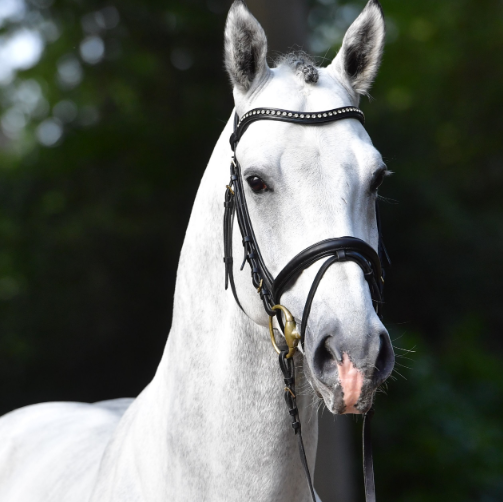 
Terms  - €1600+VAT, allowing unlimited attempts with chilled or frozen semen, for one named mare in one breeding season. If the mare is certified not pregnant before the end of September then a 50% credit applies to spend on a Schockemoehle / Helgstrand covering the following year. If the first AI of the year is July 1st or later, the credit the following year is 100%.

Please note: Schockemöhle prioritise mares on site in Germany for chilled semen from their stallions, so popular stallions may be unavailable in the peak of the season with no notice. We advise that you also have a second-choice stallion in mind also standing at Schockemöhle, in case your first-choice stallion cannot be supplied.

About - Diaron is elegant, with a good technique and is a beautiful, blood-type stallion, who is taller than his sire Diarado.

Performance - Diaron is in the sporting fast lane, with victories and placings with Patrick Stühlmeyer in the Youngster Tours of Verden, Neumünster, Zandhoven/BEL and Opglabbeek/BEL. He almost succeeded in winning a third title at the German Championships, after being placed second in the qualifier, he accessed the seven-year-old final, but had to settle for eighth place due to the only fault of all his rounds there. In the 40-year history of the German Championships for young show-jumping horses, Diaron OLD has secured the record of a stallion winning double gold, which has only ever been achieved twice. After winning the five-year-old class in 2017, the modern show-jumper also won the title in the six-year-olds in 2018. Furthermore, Diaron has received the OLD designation, which is awarded by the Oldenburg Verband to the best Oldenburg bred horses.

Sire - Diarado is one of the most popular stallions amongst both jumping and eventign breeders, famed for his outstanding conformation, temperament, and soundness.  Diarado has won several show-jumping classes; in 2010 he won the qualifier at the Bundeschampionship with a mark of 9.3, and in the final, he won the Bronze medal (with two marks of 9.0). To date, he has regularly been highly placed at advanced level, and came third in the CSI3* Grand Prix at Dobrock. He has been retired from sport for no other reason than to focus on his breeding career - he is sound and fit and still regularly appears at stallion shows. His sire Diamant de Semilly topped the WBFSH Sire Rankings for the second time in 2016, having been inside the top ten since 2012. During his career, he was French national champion and WEG team gold medallist in 2002, and European team silver medallist in 2003. His offspring include Quickly Du Kreisker (FEI World Number One 2015), Don VHP Z (winner of the Rome GCT), Utamaro D’Ecaussines (member of British Nations Cup squad), Hello Guv'nor (winner Aachen 2016), and Helidor Hybris, who jumped national grand prix as a 7-year-old. Diamant de Semilly is known for his outstanding power, suppleness and balance.

Damline -  Damsire Come On was the reserve champion of the Medingen performance test in 1988, and was then best stallion at the Bundeschampionat in 1991. Come On then jumped up to international grand prix level with Ludger Beerbaum and Ralf Schneider, winning the German Masters, second in the Gothenburg grand prix, third in the Hickstead Derby, and fourth in the Hamburg Derby. Come On was then ridden by Princess Haya, former Presidenf of the FEI, and competed at grand prix with her including the Aachen grand prix. Diaron's dam has already produced the grand prix jumper Campitello (by Concetto), and the direct damline has produced several grand prix horses including Miss Untouchable, Roxette Delores, Pentagon 78, Balou's Day Date, Tiger Lily, and Day Date.

Progeny - Until 2019 Diaron OLD's sport career has been the main priority making it more remarkable that Diaron produced the recently licensed premium stallion Diablue PS from his first crop of foals.