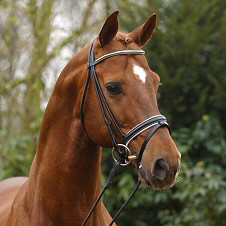 About - Dimaggio has been the most influential dressage sire standing in Britain in the past decade. Following his death in 2015, these are the last straws remaining from this great stallion. Dimaggio was an enthusiastic competitor, with a great deal of talent, and he passes this on to his offspring.

Performance - Dimaggio rose to fame when he was World Young Horse Champion as a five-year-old in 2000; the first British-owned horse to claim the title. He competed successfully up to intermediate I before his retirement.

Sire - Don Primero was a grand prix competitor himself, and is the sire of several grand prix horses including Paridon Magi, who has won and placed at international grand prix, and the licensed grand prix sons Don Tamanjo, Donario, and Dow Jones. He combines two of the most influential dressage sires; Donnerhall and Pik Bube I.

Progeny - Dimaggio's offspring are prominent at the very top level of the sport. Among them are Half Moon Delphi, team silver medallist at the World Equestrian Games under Michael Eilberg, who rides several other Dimaggio offspring, including Half Moon Dynasty, competing at international grand prix, and Woodlander Dornroschen, shortlisted for the 2016 Olympic Games. Dornroschen is in turn the dam of double World Young Horse Champion Woodlander Farouche, who is also unbeaten at international small tour level.