The son of young horse champion Dimaggio and a strong damline who has produced stars. 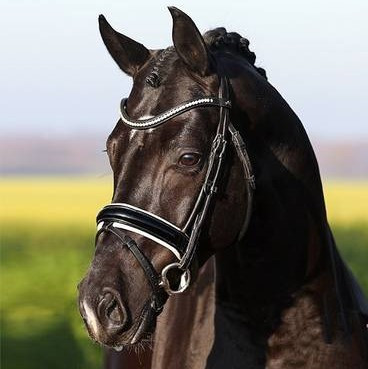 
Terms: €1200 + VAT for unlimited attempts with chilled semen, for one named mare in one breeding season. If the mare is certified not in foal before the end of September, €700 +VAT will be refunded.

About  - A son of the former young horse world champion Dimaggio and a damline who had already put two premium stallions in Vechta. He is a stallion with fantastic paces and impressed those at the stallion show, receiving high praise after displaying his balanced, rhythmical movements.

Sire  - Dimaggio was fourth in the Bundeschampionat in 1999, 2000 world champion of the five-year-old dressage horses in Arnhem/NED and then victorious until Intermédiaire I. He is the sire to many top horses for modern dressage sport. 61 of his offspring were able to place themselves in high level classes in Germany alone, most notably Duke of Britain (Frederic Wandres). For the breeding Dimaggio provided 25 sons licensed in Germany.

Damline - Feela, is the dam to the award winning stallion of the Oldenburg Körung 2011, Cristall, with Diamond Hit 2015 the Vechtaer premium stallion Diamond First, and with Bailamos Biolley the St. Pr. St. Bailea (participant of the elite mare show Rastede 2014). The damsire Fürst-Heinrich was the main award winner on the occasion of the Oldenburg graduation in 2002 and celebrated world champion of the five-year-old dressage horses 2003 in Verden. Within a few years he developed into an absolute star sire with more than 30 licensed stallions and more than 50 state and association premium mares.