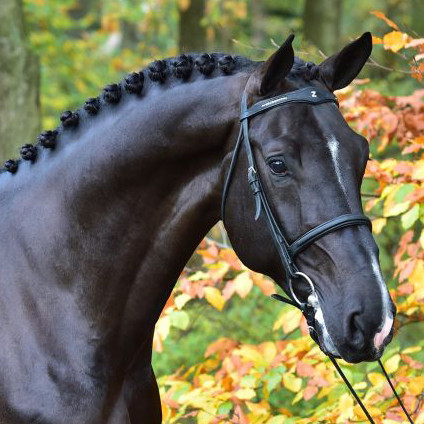 
Terms - €2500+VAT for up to three attempts with frozen semen in one breeding season, allowing registration of one foal. A contract must be signed with Zangersheide before use and no refund or credit applies if the mare is not in foal.

Limited frozen is available but in accordance with the contract insemination can only take place on site at Elite Stallions, Devon.

About - Dominator Z is an exciting young stallion, who is more than living up to his name in both sport and breeding. He is the perfect combination of size, blood, power and reflexes; a tall, large-framed stallion with boundless scope and ability. He combines the best of French and Holstein breeding, and the Thoroughbred Feenspross in the fourth generation adds the essential dash of blood into the pedigree.

Performance - Dominator has been produced carefully, with the future in mind. As a young horse, he jumped at the World Championships in Lanaken, placing 7th in the second round, and he has already picked up placings internationally at 1.30-1.45m level.

Sire - Diamant de Semilly topped the WBFSH Sire Rankings for the second time in 2016, having been inside the top ten since 2012. During his career, he was French national champion and WEG team gold medallist in 2002, and European team silver medallist in 2003. His offspring include Quickly Du Kreisker (FEI World Number One 2015), Don VHP Z (winner of the Rome GCT), Utamaro D’Ecaussines (member of British Nations Cup squad), Hello Guv'nor (winner Aachen 2016), and Helidor Hybris, who jumped national grand prix as a 7-year-old. Diamant de Semilly is known for his outstanding power, suppleness and balance.

Damline - Cephale 2000 jumped internationally to 1.40m level, while her sire Cassini I is a hugely influential son of Capitol I. He has produced more than 140 grand prix offspring, and 144 licensed sons, including Cheers Cassini, Connaught, Caressini L, Quite Cassini, and Michael Whitaker's grand prix winner and championship team horse Cassionato. Dominator's mother line has produced several international jumping horses and licensed stallions, among them the grand prix mare LB Annaconda, 1.50m jumper Concorde 46, and the stallions Pontecini and Cazaan.

Progeny - Dominator's earliest offspring have already been impressive. He served a record number of mares during his first full season at stud in 2015. Didjy Doda Z, out of an Indorado mare, was the uncontested price highlight of the Zangersheide auction, selling for €75,000, while Django Unchained Z sold for €50,500 via the Zangersheide online auction, and daughter Dancing Margritte I Z become the reserve champion filly. He already has a licensed son, D'Aganix 2000 Z, from his very first crop.