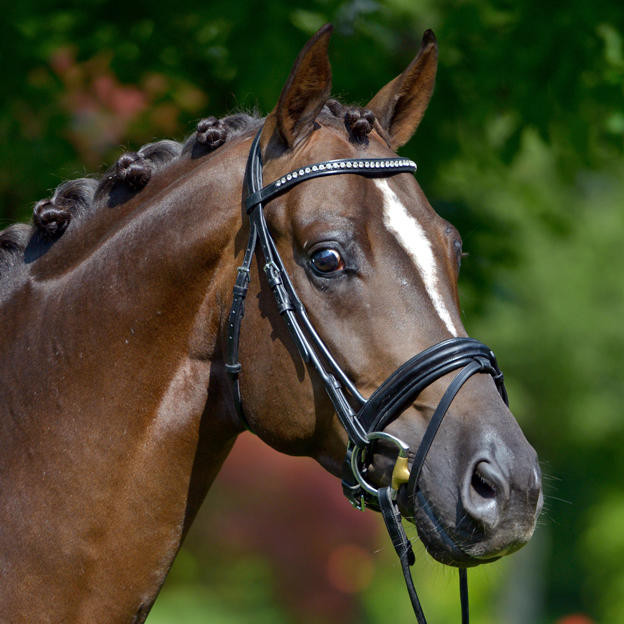 
Terms - €350 per dose, allowing the registration of one foal.

About - Don Frederic is a young stallion with excellent expression and engagement. He impresses with an immaculate conformation and three paces of exceptional quality, with the highlight of an enormous power from the hind legs and maximum elasticity.

Performance - Don Frederic's career started on a highlight, winning the 2011 Mecklenberg licensing. At his 30-day test in Schlieckau in 2012, Don Frederic achieved the maximum mark of 9.75 for his rideability judged by a test rider. With 8.35, he was the overall Reserve Champion, from a strong field of participants. He was second in the five-year-old final at Vidauban, and was successful at national-level PSG & Inter I under Matthias Rath.

Sire - Sire Don Frederico won his performance test and was a serial grand prix victor. He has over 900 competing offspring, and the most notable, Don Johnson, won the frands prix at s'Hertogenbosch, Bremen, Verden and Mannheim (and second in Stuttgart) in 2011. Don Fredrico has 33 licensed sons, including Dramatic, 2008 winner of the World Championships for Young Horses.  Also top competitor Diva Royal, 2010 European Young Rider team gold medallist.

Damline - The dam line produced Emma Hindle's World Champion stallion Lancet, as well as Wenzel I, Western Star, and Argentan I and II. Argentan I is the sire of Argentinus, a greatly influential sire in both jumping and dressage pedigrees. The dam What A Feeling has produced a full brother, Downtown, who was awarded premium status in Munster-Handorf.

Progeny - As a result of his first crop of foals, which included many premium foals, he was nominated for the Oldenburg main premium in 2013. He has four licensed sons, including premium stallion Dow Jones.