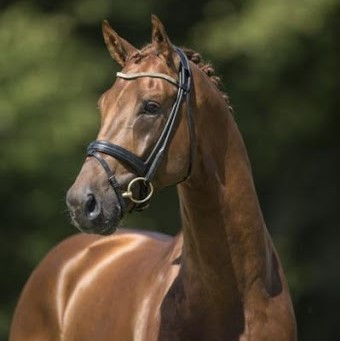 About - Don Juan De Hus was a well talked about stallion after his first public appearance at the Westphalian licensing after displaying his expressive gaits and great appearances. This top quality stallion has received the highest possible marks in young horse competitions and has also sired the World Champion stallion D'Avie. His strong combination of Jazz and Krack C is a great mix of Grand Prix bloodlines shared with top stallions such as Vivaldi who is a globally successful sire.

Performance - He began his career by winning his stallion test in Schlieckau with a total of 149 points, with the best final score in dressage (9.25). As a four year old he won every compeition he entered including the title of the title of French Champion in Saumur with 93.639%! He got the exceptional notes of 10 for the trot and 9.8 for the canter during the Final. The following year he received six times the highest score (10/10) in participated in the World Championship for Young Dressage Horses in Verden where he finishes 3rd of the small final and takes 6th place in the final!

Sire - Jazz is one of the most successful dressage stallions of all time. Almost 100 of his offspring have reached grand prix, and he is currently ranked fifth on the WBFSH Sire Rankings, having led the rankings for years and having never been out of the top five since the current rankings began; a more successful record than any other stallion. His most successful son, Jerich Parzival, competed at grand prix until the age of 19, never coming away without a team medal, barring his final appearance at Rio 2016, where he was withdrawn to a snakebite! Parzival competed at the World Cup Final four times; he won twice and came second twice. He won individual gold at the Rotterdam and Windsor Europeans and has won an incredible total of 14 championship medals.

Damline - Damsire Krack C was champion of the Pavo Cup in 1996 and 1997, and at his stallion performance test in Ermelo, he achieved very high marks for his rideability, which he has passed on to his son and grandsons.. Krack C won several grands prix with Anky van Grunsven and participated in the World Equestrian Games in Jerez in 2002. Anky also rode Jazz's sire Cocktail at grand prix level internationally.