A beautiful, modern, grand-prix winning stallion with a double dose of Donnerhall 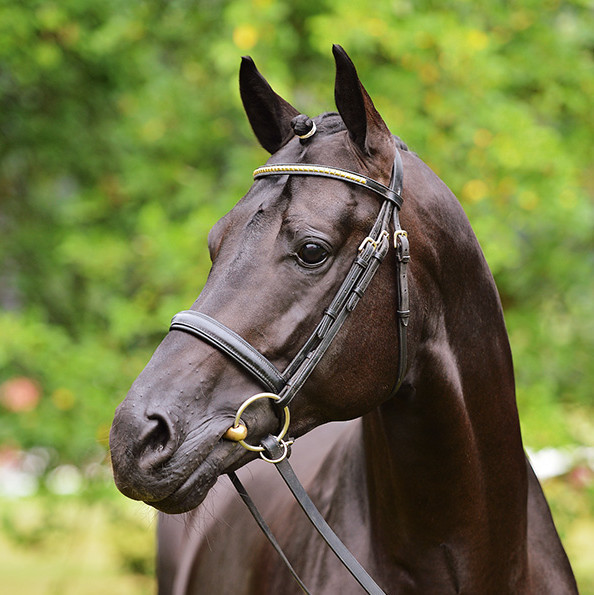 
Terms - €950 + VAT for unlimited attempts with chilled semen, on one named mare in one breeding season. If the mare is certified not in foal by the end of September, you will receive a 50% credit for the following season to use on any stallion from the same stud. If the first AI of the season is after 15th June, your credit in the event of no pregnancy is 100%.

The stud require additional notice for chilled Don Nobless, all orders must be placed before 12pm 48 hours before the delivery date.

About - Don Nobless is a beautiful, modern-type stallion with everything a top grand prix stallion needs; movement, charisma, type and temperament. He was sold at the PSI auction for an outstanding €1.22million.

Performance - He competed at the Bundeschampionat as a five-year-old, and he is now successful at international grand prix under Susan Pape; winning his first grand prix special in January 2017 and since picking up a host of placings at the level with scores over 70%.

Sire - Dancier was champion of the 2004 Hanoverian Stallion Licensing in Verden and the 2005 stallion performance test in Adelheidsdorf; after his performance test, he sold for €330,000 to the state stud at Celle. As a young horse, he was reserve champion of the Hanoverian Young Horse Championships, and was third in the four-year-old Bundeschampionat final. In 2008 he was a finalist in the six-year-old Bundeschampionat, and is now successful at advanced level. Dancier's sire De Niro is top of the WBFSH Sire Rankings for 2016, and has enjoyed a phenomenal career in both sport and breeding; he has produced countless grand prix horses, winning medals at the highest levels. The De Niro/Weltmeyer cross, in the second generation of the pedigree, has also produced Delgado (individual bronze, Aachen 2015), Super Nova II (team silver, Rio 2016), grand prix stallion Danone I and his full brothers Danone II (now deceased) and Der Designer, both winners at Inter II. Dancier's damsire Lancier is by the great Thoroughbred stallion Lauries Crusador, who won his own performance test with the highest marks in every section, including a 9 for rideability.

Damline - Damsire Don Davidoff gained fame in the dressage world by being crowned champion of the 2000 Oldenburg licensing before then winning the Bundeschampionat in the three-year-old division under Heinz Jorg Wachter. From then on, Don Davidoff was ridden by Dr. Ulf Möller, and together they won the 2002 World Young Horse Championships for five-year-olds, before the stallion was sold to Great Britain to the Bechtolsheimer family. Don Davidoff's full brother, Davidoff 164, competed at small tour, while their full sister jumped at 1.30m level. Sire Don Gregory competed at grand prix dressage and adds the second dose of Donnerhall to Don Nobless' pedigree, the first dose coming from Dancier's sire De Niro.

Progeny - Don Nobless' availability has been limited due to his competition career and training, but he has still proved immensely popular. He has a licensed son, Don Monet, from his first crop, and three further licensed sons from his later crops, plus a state premium daughter. His foals are all like him in type, and he uniformly passes on his good temperament, movement, and pretty, delicate head.