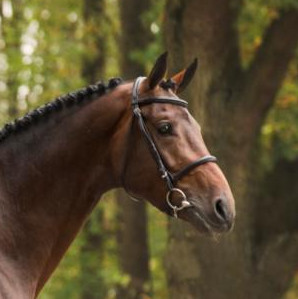 About & Performance -  Dourkhan Hero Z is incredibly high-blooded, has heaps of capacity, power and technique. Foals from his first crop stand out with their size and powerful gallop and sport a lot of blood! This up and coming stallion is a favourite of Luc Henry's, much liike many others he is keen to see what this great stallion produces. By the top sire Don't Touch Tiji Hero who made a number of Grand Prix debuts and and a Grand Prix damline, this stallion has great breeding potential.

Sire - Don't Touch Tiji is an athletic sporty stallion who has a small collection of progeny however they are top quality, with two additional licensed sons and offspring appearing at top auctions this sire is proving himself in the breeding world as well as sporting. As a young horse Don't Touch Tiji won a number of young horse classes under the rider Gudrun Patteet until the ride was recently taken over by Aleksandr Onischenko where the pair have appeared in multiple Grand Prix classes across Europe.

Damline - His dam Zinka de Kalvarie Z is a Zandor Z daughter out of a sister of Electra van ‘t Roosakker (1.60m with Janika Sprunger and Jos Lansink), Gatoucha van ’t Roosakker who is also the dam of Tinkoucha Hero Z, Alana Hero Z and Paris Sellon’s new asset Attoucha Hero Z. Via Atoucha van ‘t Roosakker the line goes further back to one of the world’s most famous mares Usha van’t Roosakker, who is also the dam of for instance Cella (Ben Maher) and Babbe (Michel Hecart).