A modern, elegant and grand-prix-winning son of the great Vivaldi 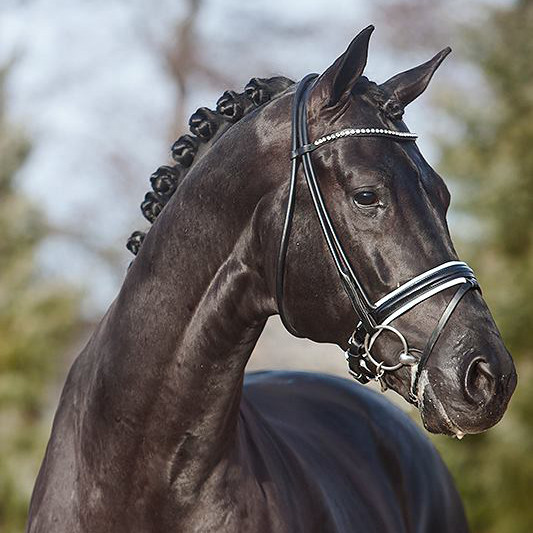 
Terms:  €1750+VAT for unlimited attempts with chilled semen, for one named mare in one breeding season. If your mare is certified not in foal before the end of September, then €1500+VAT will be refunded.

Dream Boy is collected on Mondays, Wednesdays and Fridays for delivery to the UK the following day and is available from the 1st March to 1 July only.

About - Dream Boy is the first Vivaldi son to be approved by the KWPN. He is a modern, long-legged stallion, and his impressive hind leg action characterizes all three gaits. The canter was inherited from his grandfather and in the performance test, was assessed with an 8.5. All three gaits and his exemplary work ethic were rewarded with good scores. Dream Boy shows particular talent for piaffe and passage work, with superior strength in the pasterns and ability to collect.

Performance - In his PAVO Cup qualifiers, Dream Boy won two out of the four legs, and came fourth in the final.  In the GMB Stallion competition he placed second in the final, and received a score of 9.5 for his trot, his canter, and his talent. In the World Young Horse Championships in Verden, Dream Boy was 14th in 2013 before excelling to take the bronze medal for six-year-old horses in 2014, having won the first round. In 2016, Hans Peter Minderhoud took over the ride, and together they won the Dutch Small Tour Championships in 2016. On taking over the ride, Hans Peter said: "He is a very talented horse, likes to work and has such a positive character. He has everything a Grand Prix horse needs." Dream Boy made his grand prix debut in January 2018, winning with over 74%, and was part of the Dutch team at the World Equestrian Games; a stunning acheivement in his first season at the level. He then defeated all comers in the 2018 Olympia grand prix, and won the grand prix freestyle at Mechelen just days later on a score of over 83%. In 2019, also took silver in the Big Tour he also represented the Dutch team at the World Equestrian Games in Tryon (USA) and the European Championships in Rotterdam (NED), where the Dutch team took team silver. It was also in 2019 that this outstanding stallion was ‘FEI horse of the month’ and qualified in April for the FEI World Cup Final in Gothenburg (SWE). He also qualified for the 2020 World Cup finals.

Sire - Vivaldi, Dream Boy's sire, was very successful at the small tour level under Han Peter Minderhoud and has an excellent reputation as dressage performer. He was reserve champion of his stallion performance test and in 2007 he won the Pavo-Cup of five-year-old dressage horses with Hans Peter Minderhoud. In 2008 and 2009, he added triumphs in the KNHS/KWPN stallion series achieving marks of 10.0 for his trot. At the World Championships in Verden in 2015, his son Eye Catcher won the bronze medal of the six-year-olds. In 2015 and 2016, his son Fenix won the five and six-year-old Pavo-Cup in the Netherlands. The Pavo-Cup of six-year-olds was a real festival for Vivaldi in 2016, when behind Fenix, in second and third place, were First Apple and Fantastique, both Vivaldi progeny. In 2018, Vivaldi was declared 'Preferent' by the KWPN; the highest honor awarded to a stallion.

Damline - Resia is an elite mare, did a good performance test and comes from a family that produced many good dressage horses. She has also produced Wanted, who is competing at PSG, and the licensed stallion Gladstone is also descended from this mareline.

Progeny - Dream Boy's foals inherit his good looks and movement - they are light on the ground and of a super modern type. The KWPN recommends that Dream Boy improves the conformation and canter, and is particularly suited to large mares, and we have found that Dream Boy tends to produce foals that are more refined and compact than their dams. He already has several licensed sons that are of a beautiful type and well received by the licensing committee. Under saddle, Dream Boy's offspring are forward-going, quick-thinking, and athletic types who work willingly for the rider.

In 2017, Dream Boy presented both the winner and the reserve champion in the four-year-old division of the Pavo Cup Finals, and in 2018 had nine offspring at the finals across the ages.