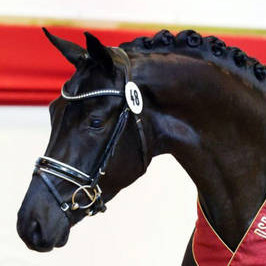 
Terms-  €800 + VAT for unlimited attempts with chilled semen, for one named mare in one breeding season. If the mare is certified not in foal before the end of September, €500 +VAT will be refunded

About- The beaming champion stallion of the DSP licensing in Munich in January 2022 enters the breeding stage. Dream Royal was described by Jörg Schrödter, dressage expert of the Munich licensing commission, as an exceptional phenomenon: "A horse that is looking for its own kind......rarely have we seen a horse here that presented itself with such superior temperament... A horse that was immediately present out of nowhere and trotted very dynamically with an outstanding basic momentum... A horse that could canter very well balanced for his size, taking large, significant strides, balancing very well in turns. A horse that showed itself very well in the walk"

Sire- Dream Roya sire; Don Royal was champion stallion at his licensing, winner of the 14-day dressage test and double Verband and DSP champion in the riding horse camp. His father is Don Juan de Hus, a jazz son with an abundance of movements. His dam Prime represents the famous Neustadt P line and is sire of the Grand Prix stallion Rubin Royal.

Damline- The dam Queen Rubin II's sire is Quadroneur.  The strong-moving Quaterback son qualified for the final of the Nürnberger Burgpokal and has now matured into an international Grand Prix horse. Before Dream Royal, his daughter Queen Rubin II already produced Immendorff (by Asgard's Ibiza), who was licensed in Munich, and in DSP Big Bang (by Bon Couer), a participant in the 2021 World Championships for young dressage horses into the pedigree. She is also the granddam of Esperanto (by Escamillo), who was also licensed in Munich in 2022. Residenz presented the impressive number of three highly successful dressage horses in the advanced class. DSP Queen Rubin (by Quadroneur), the full sister of Dream Royal's dam, is often placed in Grand Prix with Antonia von Dungern, her sister Quando Queen (by Quaterback) also with Anna-Katharina Gerber and Quatarina (by Quaterback) is victorious up to Prix St. Georges. The third dam, Kiss Me, was champion mare in the Brandenburg-Anhalt breeding association and was the dam of two stallions. An exceptional stallion from an exceptional line.