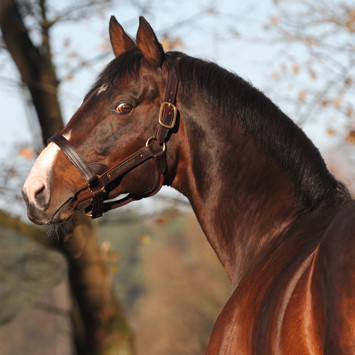 About - Duke Of Hearts is a full-Thoroughbred stallion, ideal for breeders of top class eventing horse who require a quality stallion without compromising on type. He has been licensed by four of the main Warmblood studbooks - Hanover, Holstein, Oldenburg and Trakehner - an outstanding achievment for any stallion, particularly a Thoroughbred. Duke Of Hearts is a tall, elegant stamp with a well-set neck, a short, strong back, and a beautiful head.

Performance - Duke Of Hearts won on the racetrack at distances of over a mile, demonstrating that he has not only the speed but also the stamina required for eventing. He is the most widely licensed Thoroughbred stallion in Germany.

Sire - His sire Halling, owned by the Darley Stud, is one of the most prestigious international blood sires, with a time form rating of 132 and five Group One wins to his name - in total he won twelve races from eighteen starts, including doing the double of winning both the Eclipse Stakes and the International Stakes in both 1995 and 1996. Halling has produced two other licensed sons, Fisich xx and Dandoun xx, and the successful CCI2* eventer Knockavardagh Boy.

Damline - Damsire Königsstuhl was a fantastically successful racehorse, and remains the only horse to win the prestigious German Triple Crown, having won all three races in 1979 - The German 2000 Guineas, the Deutsches Derby, and the Deutsches St. Leger - to also be crowned German Horse of the Year. He was German Champion sire in 1988 and 1994, and his two best racing sons were Monsun, winner of three Group Ones and successful sire, and Lavirco, winner of the 1996 Deutsches Derby.

Progeny - Duke Of Hearts already has a licensed son, Duke Of Harvard, and several offspring competing at CCI/CIC2* level, among them the full brothers Dacapo 277 and Dukes Up. He is a particularly good refining stallion, ideal for mares needing blood, height and athleticism for the upper levels of the sport, while also passing on his good temperament that makes his offspring so rideable, trainable and willing.