The King Is Back! 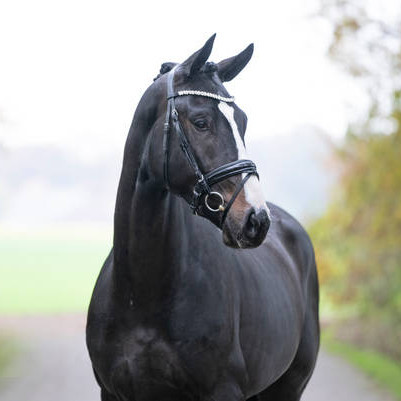 
Terms- €800+VAT for unlimited attempts with chilled semen on one named mare during the season. If the mare is certified not in foal by the 30th September, €300 +VAT will be refunded.

About- This black stallion significant in frame has the potential to climb the throne of horse breeding. Elvis in Black is a real personality, his superior appearance radiates enthusiasm at every moment. In terms of movement, the maternal half-brother of the premium stallion Bon Joker has three basic gaits close to the optimum. His strengths also include his fantastic character and exemplary willingness to perform. As one of the most talked about stallions at the Mecklenburg Hengsttage in Redefin, Elvis in Black advanced to the top price at the auction there.

Sire- The sire Erdinger, who has great movements, represents the reinvigorated, now omnipresent stallion line of Ehrentusch, which has experienced a remarkable renaissance within a very short time, mainly thanks to Erdinger's sire, the Grand Prix winner Escolar, and shines in all German breeding areas. Erdinger brings a valuable genetic outcross to dressage horse breeding through a Holstein dam of Contender, Coriander and Marlon xx. Under Sabine Rueben he celebrated his first international victories and a victory in a qualifier for the Bundeschampionat. In terms of breeding, he set milestones with powerful foals and currently has four licensed stallion sons, including a premium stallion and price peak.

Damline- The dam Fortune's Beauty previously provided the premium stallion Bon Joker (by Bon Coeur) for Gestüt Sprehe, who scored in 2021 with a very good 14-day test (end mark 8.66 with emphasis on dressage) and a more than convincing first crop of foals. Fortune's Beauty's sire Fürstenball is one of the most influential sires of his generation and is a guarantee of rideability. The Grand Prix winner Rubin Royal, who himself was able to supply many horses for the large arena, is in the third generation. The double sire genius Quattro B and the Rubinstein sire Rosenkavalier ensure performance density even in the later generations. The originally Westphalian tribe was able to provide horses for the large arena in various breeding areas, such as Dulcia (Ann-Kathrin Lindner) or Rembrandt WS (Julia-Katharina von Platen).